With some imagination (and abstractions and maybe omissions) James Blunts song could be easily interpreted as a hymn to a town. Of course I then think of my hometown Trier. 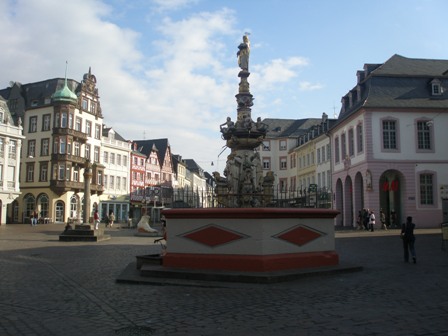 I enjoyed the time I could spend in its confines during my two month stay in Germany tremendously and I tried to be there as often as possible. “Augusta Treverorum”, a more than 2,000 year old jewel of the wine cities in Europe, is increasingly attractive to me, the older I get. The main market square (Hauptmarkt) is what I would like to introduce to you today. Its a splendid location. Some call it one of Germany’s most beautiful town squares. It is located at the centre of the city only a few blocks south from the Porta Nigra on Simeonstrasse, the pedestrian shopping street. The city received the market rights in 958 AD from Archbishop Heinrich I and a market cross on a granite pedestal from Roman times was erected to this effect. In about 3 m height an inscription says “Henricus archiepiscopus Treverensis me erexit”, which loosely translates as something like ‘Archbishop Heinrich erected me’.

Another jewel on the square is the St Peter Market Fountain. It was created in the 1595 and shows St. Peter with the key of the city on top and it incorporates statues that symbolize justice, fortitude, temperance, and prudence. The surrounding houses date from different architectural periods among them renaissance, baroque, classicism and late historicism. The old main police station and the former Domhotel are built in a neo-renaissance style. The gate to the market church St. Gangolf shows baroque features.
Another architectural marvel is the old citizens house, called ‘Steipe’ dating back to 1430 and the ‘Red House’. 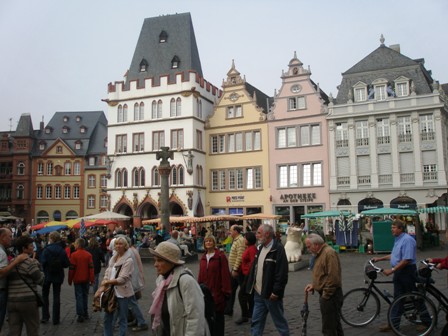 Frequently, I visit the many wine bars and country inns. But I also take long strolls to look around town. My curiosity is endless. Moreover, I also admit to following to a certain extent the traits of my childhood and youth. Then all kinds of things come to mind, sounds, smells, faces, moves, music, short encounters, and many more. Human memory is such a fickle thing but stimulated in the right way it sometimes yields interesting results. 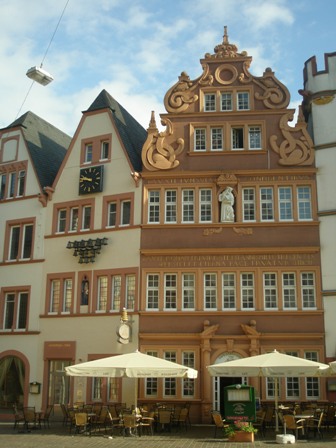 Hope to see you soon in Trier.

This entry was posted on Thursday, November 29th, 2007 at 5:26 pm and is filed under history and culture. You can follow any responses to this entry through the RSS 2.0 feed. You can leave a response, or trackback from your own site.