We are so blessed. Living in Thonglor, Bangkok, we have quite a number of first class restaurants just in walking distance from our flat. The other day, we explored La Villa – The restaurant, a classic Italian place at the corner of some smaller lanes right in the heart of Thonglor.

The building is a 1930 architectural style modern replica villa with a large parking lot in front. After one has entered the restaurant, the hassle of the corner block traffic, is left behind and the cozy atmosphere of a true Italian family restaurant engulfs the eager dinner guests.

After an entree of bruscette, we went right for the main course. It was a Friday night and the four of us were hungry and tired. I went for my favorite pizza, a pizza margherita. the girls had some ravioli and Margit ordered a seafood pasta. To cut a long story short, the food is superb. 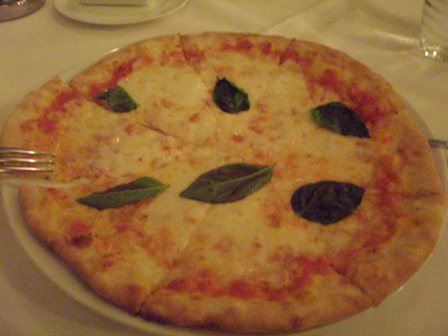 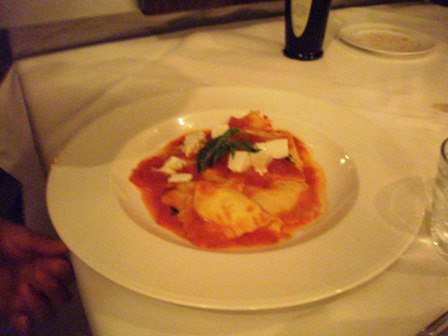 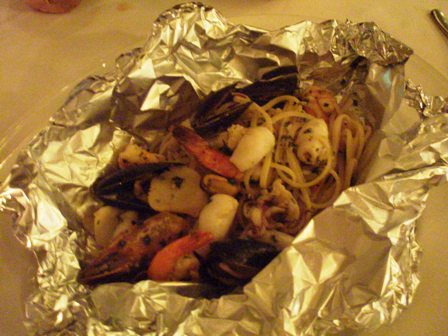 My knowledge of Italian wine is negligible. Having lived in Italy for almost three years but so little expertise, I am ashamed. Ordering the wine therefore, was a challenge. I choose a bottle of red, despite Margit’s seafood dish but with her consent (I admit of not caring much for the traditional tenet of having white wine with fish and seafood dishes). 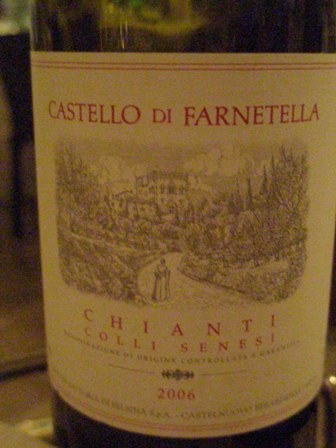 My choice was a ‘2006 Castello di Farnetella – Chianti di Colli Senesi’, a wine from the lower price range of the restaurants extensive wine list. As I learned later from my research, this was an excellent choice. Colli Senesi is a sub zone of Chianti which does not have the “classico” designation. As a consequence prices are ridiculously low for the quality. Whereas just across the road the classico wines sell for about US$ 30-40, they are only about about half at non designated side.

The wine is medium bodied and has a good structure. It feels silky in the mouth and shows aromas of raspberry, prune, floral notes and licorice.

We had a great evening at La Villa. With its very competent and friendly service, this classic Italian restaurant is an excellent choice for a family meal in a homely environment. Check it out when next in Bangkok.

On the blog of Geoff Bilbrough I found a most useful tool: the Australian Wine Region Map. If you are planning a trip to Australian and you want to visit some wine country, this map is exactly what you always wanted.

On Geoff’s link, the “Wine Wine Wine” (which by the way is a wonderful informative site) the map looks like the sketch below in the left corner:

I played a little around with the Google based map, and found it amazing, especially the Yarra Valley part. Unfortunately, our wine region, the Upper Goulburn Wine Region is not (yet) on the list of Australian wine regions.

The interactive map allows you to select a wine region and/or a winery so that you can plan your winery tour. It prints out the map as well, if you like. Precondition is of course that the wine region and the vineyard/winery you intend to visit are somehow included in the system.

I will try to use the tool soon when we all go to Australian for the winter break. I’ll report back to you.

For many Germans lamb is not their favourite meat but for Australians it is a kind of a staple. We had four lamb recipes to choose from and decided on an Irish lamb chop stew. The recipe came from Best Recipes where you can find it. 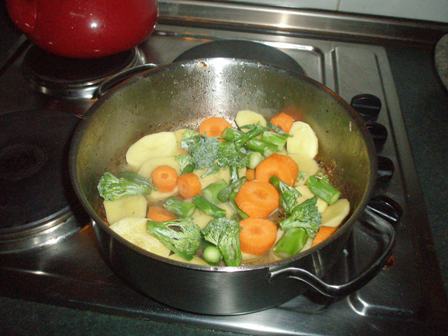 Five kinds of veggies as the base (potatoes, onions, carrots, broccolini and leeks). 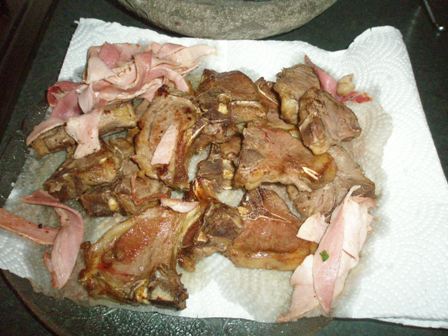 The lamb chops with some ham.

All of the above in layers.

Until you reach the top. 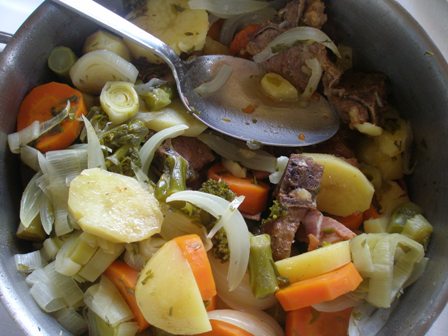 Hm, yummy food. Even for a not so enthusiastic lamb lover such as me, the chops were just great.
The children gobbled it up in no time. 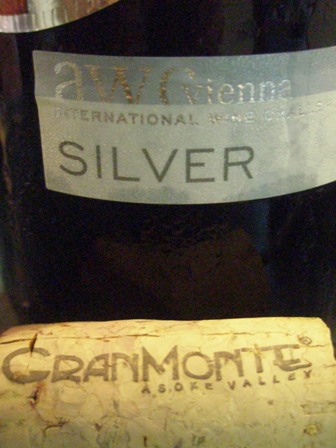 Well, I had no Cabernet Sauvignon left, therefore my ‘2006 Primavera Syrah’ from Gran Monte in Asoke Valley, Khao Yai, Thailand was the natural choice. This Thai wine is wonderful, spicy, peppery and with “umpf”, my favourite wine from Thailand. It went very well with the lamb chops. 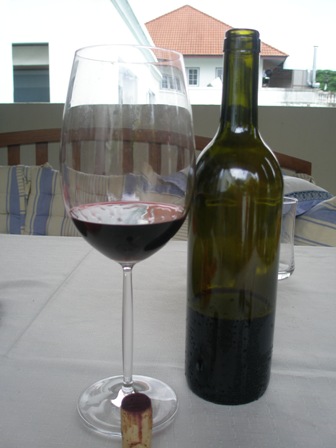 But after this delicious meal, we were longing for something else, something homely, maybe Victoria? I grabbed the only bottle of ‘2006 Two Hills Merlot’, still unlabelled, which I have, ah, now had, a fruitbomb. I tell you this wine feels like biting into pure cherries. Incredible. I was glad I had not opened it with the lamb. It is a wine which stands on it’s own, so to say; ideal with cheeses, I would say.

It made all of us homesick in the most positive way one can imagine.

Soon we’ll be on the farm in Glenburn again.

We are so lucky in Bangkok. Our humble home in Thonglor is just around the corner from some major eateries. One of them is Patara Restaurant which we patronize from time to time. During a recent visit we discovered that Patara was bestowed with the Best Restaurant of Thailand award. They deserve it. I tell you, the food is delicious as the following pictures suggest.

When Jasmin from Jakarta visited us recently, we took her out to Patara and had a wonderful meal. The two entrees below are fabulous. We drank beer with the Thai food. The Phuket beer is not bad. But Patara has also a fine wine list, we just did not feel like wine.

Finally, we discovered that Patara restaurant is also offering a cooking book. If in Bangkok next time Patara is a must for you and any gourmet traveler. 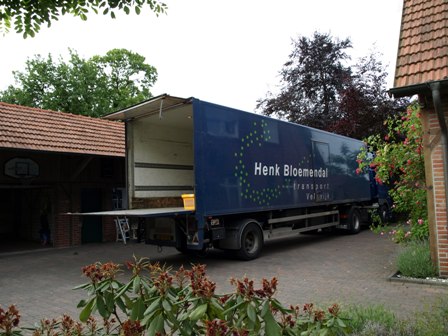 My friend Uli sent me the above pictures of a 15 t truck delivering two pallets of Two Hills Merlot to his residence in Ramsdorf, Muensterland. It was not an easy manoeuvre. But they got the bottles safely into place.

The shipment consist of the last Merlot bottles from our 2001 and 2004 vintages. We also had some 2004 Merlot, which was somehow left behind, re-bottled so that the two pallets could be fully filled. Only the next shipment will contain the Two Hills 2006 vintage which is officially not yet released in Germany.

The sale is on. If you are interested in our wine, please contact Uli and make an appointment to pick up your bottles. In case that you need it to be sent to you directly, I will try to arrange it myself through a mail service in Trier.

Cheers everybody and thank you Uli for doing this for us again.

Heaven on a stick

As you all know life in the tropics is sweet, and can therefore be described as “heaven on a stick”, as we say in Australia. This is even more so since (finally) the best beer of the world arrived in our local neighbourhood super market, the Villa Market in Thonglor, Bangkok.

There are of course many “best” beers in the world depending on ones taste, upbringing, and the general circumstances. But since I come from the Mosel river, my favourite beer is “Bitburger Pilsener“, brewed in the small town of Bitburg about 30 km north of my home town Trier. 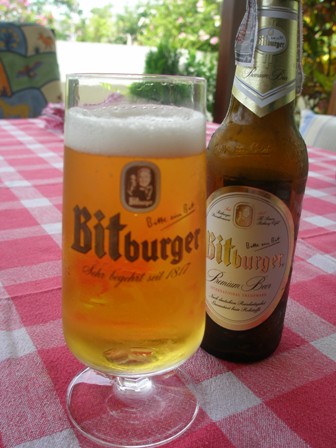 After patronizing this supermarket for about nine month and browsing the beer section consisting mostly of Japanese, Thai and Bavarian beers, you cannot imagine my joy to find a few bottles of Bitburger beer.

Apart from a good beer, a glass of wine and a good meal, the tropical pleasures are simple: enjoy the fragrance of a Frangipani flower (Plumeria), a dash in the pool, and company of family and friends. 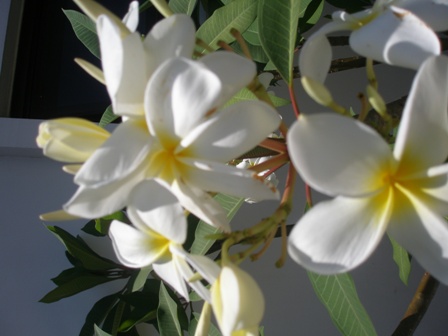 A potted Frangipani tree on my terrace in Bangkok

It’s just too hot these days

Hope you all have a good weekend. Cheers.

Have you heard of Pavlova? Well, for Australians that’s the stuff you want for dessert. It is wonderfully refreshing, smooth, fruity and just a delight.

Pavlova, you might think does not sound very Australian. And in fact it is not. The dessert is named to honour a Russian ballet dancer, Ánna Pávlova (Russian: А́нна Па́влова) touring Australia and New Zealand in the 1920.

Commonly referred to as “pav”, it is a cake of meringue with a crispy crust and soft inner part topped with red and blue forest fruit and some kiwis. The name is pronounced “pævˈloʊvə” unlike the name of the dancer which is pronounced “pɑːvləvə”.

The dessert is a very popular dish. It is also an important part of the Australian national cuisine. Isn’t this mazing.

However, research suggests that the Pavlova originated from New Zealand. Well, that’s no deterrent for a culinary delight. 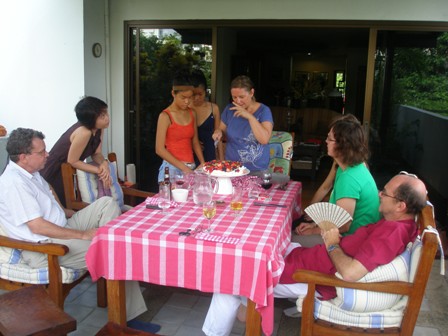 We had the above Pavlova on our terrace in Bangkok after a barbecue lunch with some friends. Lots of meat, salads and vegetables were consumed. Lashings of beer and wine made this consumption all the easier. But best was the company.

A recipe for Pavlova you can find on: http://en.wikipedia.org/wiki/Pavlova_(food)

Last year I had the chance to dine twice at Chopin restaurant which is located between Wannsee and Griebnitzsee in the South west of Berlin. The cuisine the restaurant specialises in is Silesian food. Today Silesia is a region of Poland smaller parts of which, however, are belonging to the Czech Republic and to Germany. 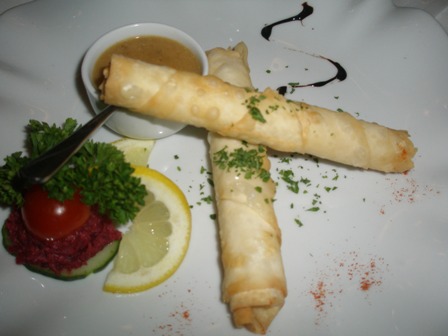 We had a fixed menu which was ordered for the occasion. The entrée consisted of “Schlesische „Zigarren“, Silesian cigars (price Euro 3,90), a puff pastry filled with sheep feta and a mustard sauce. 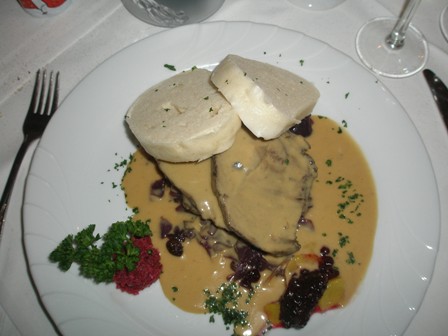 We could choose between two main dishes: a “Schlesischer Sauerbraten”, a marinated pot roast (price Euro 11,90) with red cabbage and apples, peaches and cranberries served with German dumplings, ….

…and a fish dish, consisting of a pike perch roasted in a sauce of dill and with zucchini (price Euro 13,90). Potatoes and vegetables were also presented.

Since we dined at the restaurant twice within a week, I had the opportunity to taste each of the main dishes.

Needless to say (you can see it from the pictures) the food at Chopin restaurant is delicious; it’s a splendid example of German country cuisine at its best.

There were two wines served with the food: a white (Grauer Burgunder/Pinot Gris) from Baden, Germany and a red (Nero d’Avola) from Sicily (which is not on the wine list any more).

I had the white, a ‘2004 Oberbergener Bassgeige, Grauer Burgunder, Kabinett, dry’, from the Kaiserstuhl wine region in Baden.

It’s a massive white wine (13% alc.) not something light for the summer. It has substance and structure which make it an ideal partner for pairing with Silesian food.

The producer of the wine is a “wine-co-operative”. The Gault Millau as well as the Eichelmann Wine Guide award the co-operative “one bunch of grapes” (Gault Millau: reliable) respectively “two stars” (Eichelmann: good producer).

I very much like this cosy family restaurant. If you are in Berlin next time, please do not miss to pay it a visit.

I have written about the stupidity of the Brumby governments water policy in Victoria on this blog before. Surfing the net today I found a wonderful video on Plug the Pipe by a young man who summarised and assessed the Victorian Labour governments blunder. Great job I find. We farmers will pay the price and so will the Victorian taxpayer.

We, the small people of wine

Today, I came across a quotation by Frances Ann (Fran) Lebowitz, an American social commentator, which reads like this:

I am glad that there are so many of us, “small people” around, thinking, talking, sharing, writing and blogging about wine. The world would be a much poorer place without us. Ideas we have too, and a few things as well, I guess.

My friend Siggi Herzog sent me a youtube video which depicts a lovely German “drinking song”.

With this, I wish you a wonderful weekend, a time of food and wine, with song and laughter. Cheers