When doing my research on the internet for my entry on Sucellus and Nantosuelta, I came across a webpage which advertised a very different kind of ‘Sucellus’. On www.sucellus.de Dr. Willi Rieth from Kinheim, Mosel produces a ‘Mosel Sherry’ called Sucellus. Dr. Rieth is by profession a food analyst. In his spare time he is hobby vintner. Because the name ‘sherry’ is protected by law, the drink has to be called a wine aperitif. Kinheim is the location where a statue of Sucellus dating back to the 3rd century AD was found in 1976 during land consolidation works. Dr. Rieth decided to call his wine aperitif Sucellus after the Celtic god of vintners and coopers. 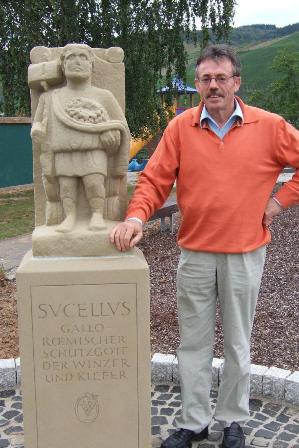 Dr. Willi Rieth and a statue of ‘Sucellus’, the Celtic god of vintners and coopers, in Kinheim, Mosel

Some claim that sherry production is one of the most complex of all winemaking methods. In the South of Spain where Sherry originates from three main grape varieties are used ofr Sherry production: Palomino, Pedro Jimenex and Moscatel. Along the Mosel, its of course Riesling grapes on which the ‘wine aperitif’ is based. The mature Riesling grapes are hand-harvested and carefully pressed. The must is fermented in large oak barrels (barrique). After the wine is made and the conditions are right, a specific yeast, called the flor, forms on top of the wine and mellows the flavour. After that the wine is fortified usually with clear wine alcohol which preserves and protects the sherry against microbiological influences. The aging and blending of Sherry is quite a complex procedure where various systems are employed (for instance the Solera system).

The above bottle has travelled the world and made more than 800,000 km in the air (about 18 times around the aquator) which brought an entry into the Guinness Book of Records. Even Indonesia was on the list of the countries, where the bottle touched down some 10 years ago.

PS: Both photos were made available by Dr. Rieth

This entry was posted on Wednesday, November 28th, 2007 at 8:09 am and is filed under food and wine. You can follow any responses to this entry through the RSS 2.0 feed. You can leave a response, or trackback from your own site.