On our second day at Prince Edward County, Ontario we went to the east side of the island to explore the scenery and to visit a winery (Del Gatto Estates Winery) and the cheese factory of which we had heard so much of.

Fifth Town Artisan Cheese Factory cheeses have an extremely good reputation. The company produces cheeses made of goats, sheep and cows milk. Rumor has it that the company reached its five year target after the first year!

It was the second of August, the sky was blue and we were in euphoric holiday mode. The drive to this most eastern place on Prince Edward County through the lush country side was very pleasant.

Fifth Town Artisan Cheese Factory is a division of Cressy Gourmet Investments, which is an incorporated and privately owned environmentally and “socially responsible” enterprise. The company has won many environmental awards for energy efficiency but also for its cheeses.

A veggie garden in front of the factory

…and the building material used

Peeping into the factory where the cheeses are made

We could not resist buying a few cheeses (for about 90 Canadian dollars), some of them we should enjoy with our hosts in Stratford, others we took back to Germany.

The factory is a good place to visit at the island. You should not miss it when visiting Prince Edward County in Ontario.

The map how to get there: 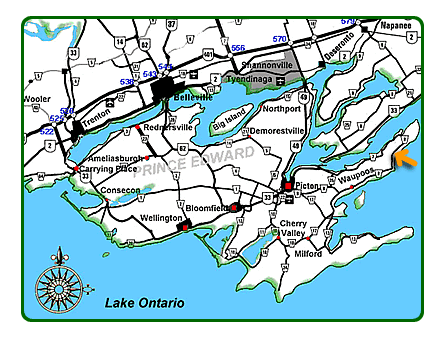