Kuala Lumpur hides some of its beautiful treasures. One of them is Masjid Jamek, one of the oldest mosques in the city, located at the confluence of the Klang and the Gombak rivers in the heart of the city (exit Masjid Jamek LRT station).

Masjid Jamek was designed by Arthur Benison Hubback, a British architectural assistant to the director of public works at the turn of the 19th to the 20th century. Before coming to Malaysia Hubback had served in India and was very much influenced by the than common “Neo-Moorish/Mughal/Indo-Saracenic/Neo-Saracenic” style. He used his knowledge of this design school also in the case of the Jemak Mosque. 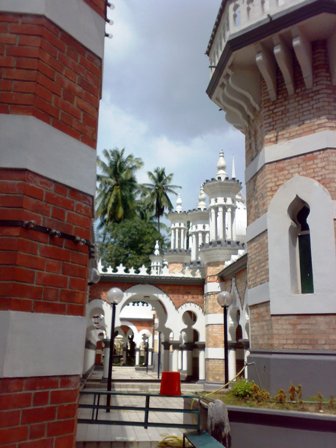 Arthur Hubback was also the architect of the Kuala Lumpur Railway Station and the Old City Hall. The mosque is an island of peace in the otherwise bustling mega-city. It was openend in 1909 and served as Kuala Lumpur’s main mosque until 1965.

If you happen to be in KL you should not only visit the KLCC, the imposing towers reminiscent of Notre Dame in Paris, but take your time and go to the small mosque and pay your respect.