Life in the City – Bangkok

Well, it’s a month now that the family has been living in Bangkok. From a spacious house with a grand garden (I had one rose apple, two mango and five rambutan trees) in suburban Jakarta into a serviced apartment on the 11th floor in Bangkok, that’s quite a change. 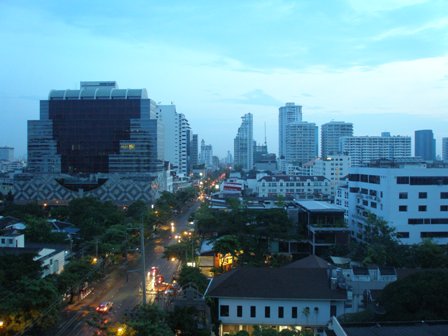 The view from Centre Point Thong Lo in the evening

Both cities are mega cities in Asia with millions of inhabitants, and in fact we lived most of our 20 years in Asia in these kinds of cities (Beijing, New Delhi were the others, the only exception was maybe Singapore which was small in comparison, with only 3.5 million inhabitants). But in Jakarta we lived as if we were in one of the millions of villages on Java island, with roosters crowing in the mornings, goats bleating, a motorcycle passing, the call of the chatib from the local mosque, these were the sounds we were used to. The garden was green, which had a calming down effect on me. My tropical garden was where I could forget where I was.

Much less traffic in the morning

Without the double glazing here on the 11th floor, we would be engulfed in motorcar noise. Thong Lo is the name of the neighbourhood and it’s a lovely place with many small shops and restaurants. Most of the people living here seem to be Thai, interspersed with the odd foreigner here and there. There a quite a few wine shops and wine bars in the vicinity. I will have to explore them and report to you. Soon you will hear more about fine wines in Bangkok.

This entry was posted on Sunday, October 5th, 2008 at 9:06 pm and is filed under general. You can follow any responses to this entry through the RSS 2.0 feed. You can leave a response, or trackback from your own site.

One Response to Life in the City – Bangkok