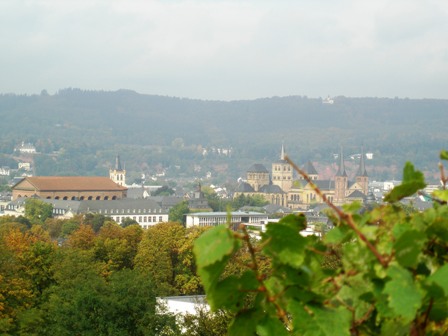 The wine city of Trier (from the Petrisberg side)

According to the website www.riesling.de the annual wine auction of the “grosser Ring” (freely translated as ‘big ring’) a subdivision of the regional section of the Association of German Prädikat Wine Estates (that is how on the website of the association, the German title: “Verband der Deutschen Prädikatsweingüter” is translated) was a full success. The association has about 200 members German wide. About 13,000 bottles of wine were auctioned off. The sale brought in an amount of € 1.3 million.

The most expensive wine of the auction was a single bottle of a ‘1959 Wehlener Sonnenuhr Riesling Trockenbeerenauslese’ by Weingut Joh. Jos. Prüm which was sold for € 5.097.96. Wow, isn’t that amazing. 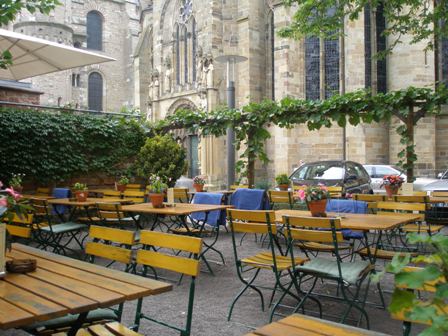 Wine bar Kesselstadt in Trier just opposite the church of Liebfrauen

The auction lasted for more than 5 hours much longer than a marathon run. The general trend as far as bottle size is concerned seems to be heading towards magnum bottles. For wines filled in such size bottles premiums were paid.

The tasting prior to the auction revealed the very high quality standard of the 2007 vintage Rieling wines. On www.riesling.de you can find the detallied rating of the individual wines and the prices paid for the various lots sold.

Even for ordinary mortals like me, the auction is good news. The superior quality of the 2007 Mosel Riesling vintage will also apply for more everyday wines which I can afford. Next time in Trier I will indulge myself again. Why don’t you come with me.

This entry was posted on Saturday, October 4th, 2008 at 10:11 am and is filed under general, wine regions. You can follow any responses to this entry through the RSS 2.0 feed. You can leave a response, or trackback from your own site.