What to do on the 31 of December? Well, I thought to check out my wine fridge. Small as it is, the review did not take very long.

I was amazed that my wine collection included wines from Germany (yes mostly Riesling wines), Austria, Italy, Canada, Australia, China, Vietnam, Myanmar and of course Thailand. This makes eight countries, four in the West and four in the East.

I also realized that I have no French wine in stock. 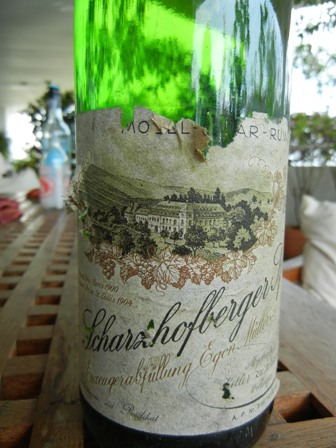 Two wines in particular I look forward to taste in 2013.

One is a ‘1982 Scharzhofberger Riesling Spaetlese’ by Egon Mueller from Wiltingen at the Saar river, the second a ‘2009 Pinot Noir Centgrafenberg Grand Cru’ from Rudolf Fuerst in Buergstadt, Frankonia. 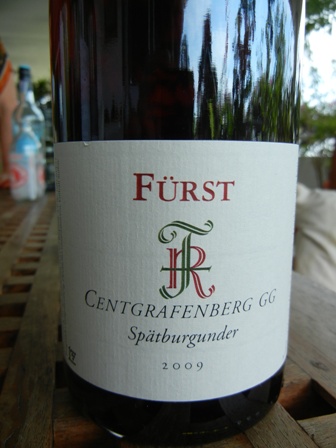 Both wines, both terroirs and both vintners are among the top in Germany.

The Riesling bottle looks OK, just the label has suffered a bit. I wonder what a 30 year old wine will taste like. In any case it is a treasure. I wonder when I shall open it?

The bottle of Pinot Noir I bought from Fuerst junior during a wine tasting at Karthaeuserhof in Eitelsbach last August.

There are of course other treasures in my wine fridge. More about this next year. Now I will get ready for the New Years party.

I wish all of you a good start into 2013, and stay tuned to the Man from Mosel River.

Obituary to a name: Mosel-Saar-Ruwer

Decisions have been made to rename the wine region where I come from. Soon it will not be called any more by the familiar name of Mosel-Saar-Ruwer but only Mosel. The two tributaries, Saar and Ruwer, where some of the best Rieslings of the world are grown, will not feature any more in the name of the wine region. Personally I find this a pity. I love the two tiny wine producing areas with their distinct character. They are the most charming and lovely destinations for wine lovers and other tourists alike.