Roast venison from Schoden and a Riesling from the Mosel

It has been a while since my last blog entry. Somehow my work does not allow regular blog entries any longer. You will have guessed right: I was on an extended business trip to Germany.

After my official program was completed I also visited my mother in my home town Trier, just for a short weekend only. It was a cold and rainy day when I arrived late in the evening. My beloved Mosel lay in the dark.

Fortunately, a splendid meal was waiting for me. My friend Heinz had prepared roast venison for me. It was the last piece of meat he had left over from his hunting days in Schoden, Saar. In spring 2010 Heinz and his friends had lost their hunting rights to a group of hunters from Luxemburg.

Fortunately, he had the freezer full of delicious meat: venison, wild boar, wild sheep among others. The last piece of a young deer was just the right stuff to make me happy. As you can see from the two pictures below, the meal was awesome. 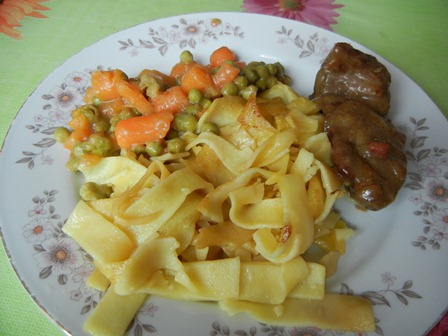 Roast venison with noodles and vegetables

What a fine consistency

What wine would go with this meal? Well, since the meat came from the Saar, the wine had to come from the Mosel. Fortunately, we had a bottle of ‘1999 Neumagener Rosengaertchen Riesling Spaetlese’ by Rainer Krebs, a winery in Neumagen-Drohn, Mosel. 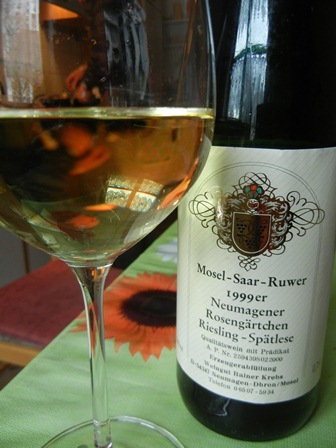 The wine was amazing. It had the nose of petrol fumes, was full and buttery. Despite its age, the wine still displayed its great character. I do not know how many more year it would have lasted.

It complemented our meal in a perfect way. We were reminiscing about the glorious hunting days in Schoden, the nights we spent together sitting in the cold and waiting for deer or wild pigs to show themselves. It was a wonderful time, and I am sad that the hunting rights could not be retained. But such is life, good things come, and go.

I salute all the hunters who treasured their time in this fabulous place.