Some of you might wonder when I would put the first pictures of our new place up. Well, here they are. In fact they are pictures of our first trial barbecue on our terrace for some trusted friends. The trial run was quite successful and calls for a repeat. Here are some pictures of the event.

But I also did beef

I also roasted a big piece of pork but it went so fast that I had no chance to take a picture of it. 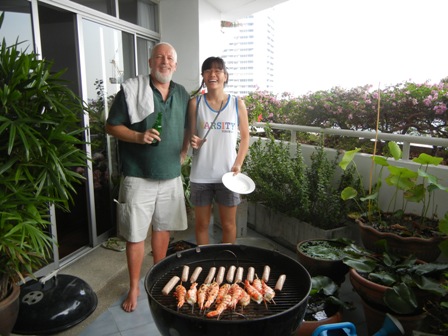 I always drink a ot of beer while behind the grill. Charlotte does not drink (yet). 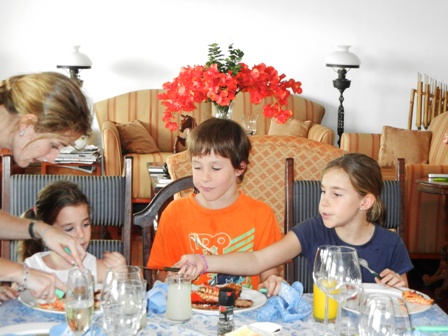 The little carnivores need to be fed first

Then came the adults 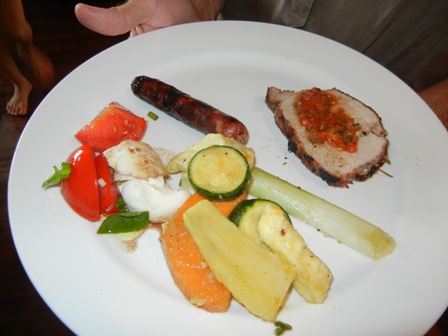 The vegetables I prepared in a wok which I put on top of my Weber.

The girls had baked a cake: Frankfurter Kranz

As usual, nobody wanted to go home 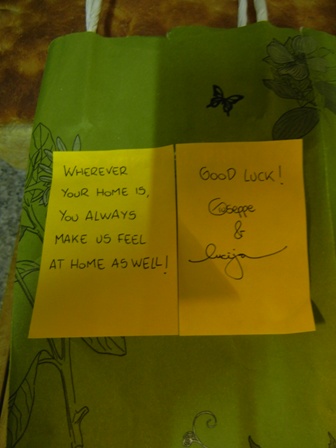 Beautiful message to us by Giuseppe and Lucjia

As always when I do barbecues I have no time to take care of the pictures. I fact I did not take any of the many side dishes, the salads, the vegetables and the carbohydrates. But we had a jolly good time, that’s confirmed.

I could also not keep track of the wines consumed during the event. Everybody brought some bottles. I restrict myself to one white and one red (I found the empty bottles after everybody had left).

The ‘2009 Taylor’s Sauvignon Blanc’ from the Adelaide Hills in South Australia is a beautiful refreshing wine at a hot summers day. Since we have always “hot summers days” in the tropics it can be enjoyed year round in Bangkok. Hurrah.

The ‘2009 Rosso Conero’ by Fazi Battaglia is an inexpensive mass-produced red from Marche, Italy. It is a blend of Montepulciano (85%) and Sangiovese (15%) for easy drinking.

The wine company is already more than 60 years old and has about 280 ha under vines in the Marche wine region of Italy. In the meantime Fazi Battaglia has bought up smaller vineyards and wineries in Toscana, one is Fassati with 80 ha and the other Greto delle Fate with 11 ha under vines. 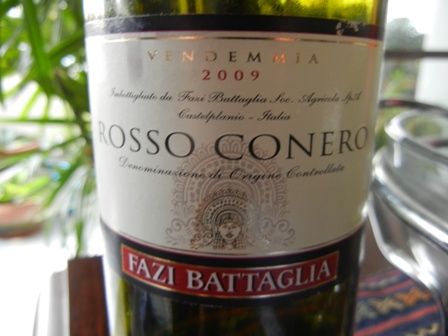 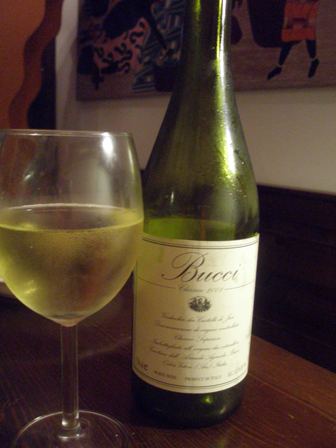 From Alessandro Mauceri and Il Grappolo Divino (Frascati) I acquired two bottles of wine from Villa Bucci, a red and a white one. Villa Bucci is located in Montecarotto (Pongelli), in the Le Marche region. The wines from this region are little known by the mainstream but definitely worth to be explored further.

Villa Bucci is a jewel of a winery from the Le Marche region. I was so happy with this discovery. Their Verdicchio wines are all made from their own grapes, grown on 21 ha at Castelli di Jesi.

Italy is maybe the place with the highest number of native vine varieties. Verdicchio, mainly grown in Le Marche, is one of them. High in acidity, the grape makes excellent white wines, fruity and nutty (almonds) with a capacity for aging gracefully.

Back label of 2008 Bucci Verdicchio

My bottle from 2008 had no time for that. We consumed it on a beautiful summers night with a delicious pasta. It is a young but elegant wine, with a golden greenish colour, fruity and fresh with a light almond aroma.

Thanks Alessandro for this selection. I highly recommend to everyone to try the wines from Villa Bucci in particular and Le Marche in general. Great learning.