FohBoh – The Wine Community and the future of blogging

It’s about four years ago that I joined the Open Wine Consortium which was later renamed the FohBoh Wine Community. Membership is about 5,951 when I checked today, so only a few short of six thousand people and/or companies.

The group provides a global platform for food and wine professionals and attempts to help them in their business. It’s a kind of network of people passionate about wine and the wine industry. I am a member but not a very active one. I update my page only very seldom.

As a (mostly enthusiastic) hobby blogger I have to manage my own time even more carefully. My day job requires me to be on twitter and facebook, direct the production of content for our company websites, video clips, write short stories, and coach our team to do PR work on social media. This leaves little time for my own existence as a food and wine blogger. Moreover, having spent so much time in front of a device, I just cannot help it in the evenings and prefer to have ‘time without gadgets’.

I constantly contemplate about stopping my own blog, The Man from Mosel River, despite the fact that when people identify me as “The Man from the Mosel”, I am thrilled and motivated to soldier on. Fact is that I would maybe be better off with a facebook page to which my twitter account “Man from Mosel River” could be synchronised.

I could become quicker, provide shorter inputs, but especially more pictures and video clips. My android hand phone would be the device where most of the input would go through, so no need for a laptop or anything bulky.

Nowadays professional wine bloggers have teams of writers, freelancers etc. to fill their wine blogs. Just think of Jancis Robinson, Dr. Vino or James Halliday. And as time goes by, I am getting slack regarding a regular up-date of my blog. Consequently my numbers are going down as well. I also might have to ‘re-vamp’ my Man from Mosel River, make it more funky and have moving pictures.

Headlines in newspapers and magazines muse and contemplate about the power of food and bloggers. At the same time it is so easy to leave feedback and comments on sites such as trip advisor. Why bother with a fully fledged blog?

Hmmm, I might do something else. But the cracks in my armour are getting slightly bigger. I have to think. As always bear with me.

What would you suggest, by the way?

PS: What I like is my archive which has become quite big over the years and allows me to trace sunken memories and paths of my past.

“New latitude wines”, is a catchphrase coined in 2004 by Bangkok based wine writer Frank Norel.

For a long time the tropics were not considered suitable for the production of grape vine. The territory between latitude 30 and 50 were vintners “nowhere land”, so to speak.

This has certainly changed over the last decade. Nowadays grapes are grown in places like Burma, Laos, Vietnam, Brazil, and of course Thailand.

In November this year (12.-18.11.) already the 3rd International Symposium on Tropical Wine will be held in Chiang Mai, Thailand. 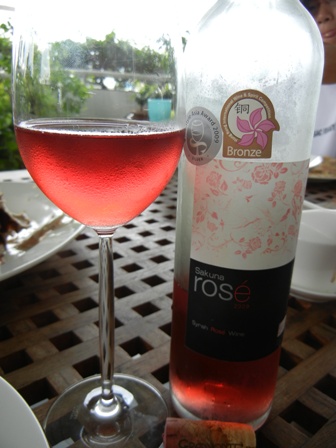 Beautiful colour – Rosé is ideal for the hot days in Bangkok

So far, I have visited about half of the Thai wineries. I love the wines produces by GranMonte Estate, a Thai wine producer from the Khao Yai wine region in the Asoke valley.

GranMonte is a family business and boutique vineyard. At this years Decanter World Wine Awards GranMonte won two silver and one bronze medals. This is recognition of the hard work of Nikki and her parents, Sakuna and Visooth Lohitnavy. 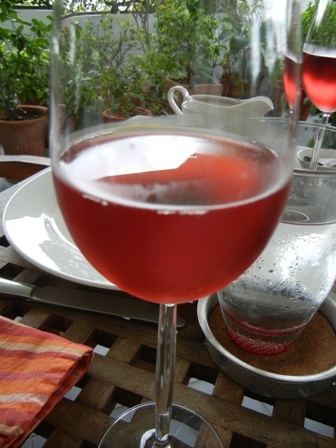 Recently I discovered that I had “forgotten” a bottle of 2009 Sakuna Rosé in my wine fridge. Since it was a beautiful sunny day, the GranMonte Rosé wine was my natural choice to accompany our lunch.

Thai wines lend themselves to be paired with Thai food as well. The high acidity of the whites is a good requisite for such food and wine pairing. The Colombard and Chenin Blanc varieties are doing well in the tropics and are producing stunning examples of New Latitude Wines. But also Syrah and Cabernet are doing well.

The back label advised to consume the bottle within one year. Oh, I thought, it’s 2011 now and the wine was from 2009! Would it be too late?

Alas, it turned out that the bottle was perfectly fine. The Rosé made from Syrah grapes tasted fresh and fruity as the previous bottles I had served.

In an earlier blog entry I have described how to get to GranMonte Family Vineyard. The winery is definitely worth a visit. The trip from Bangkok to the Asoke valley takes less than two hours. However, I do know how the current monster floods have affected the region and the roads to get there. Maybe the end of the rainy season is a better time for a visit.

Luckily there is shop in Bangkok where you can get the GranMonte wines.

One of the best wineries along the Nahe river is Weingut Emrich-Schönleber in the village of Monzingen. The family vineyards (about 33 acres) produce great wines, mostly Riesling.

In 2010 the Gault Millau Wine Guide gave 10 of the 17 wines of the Emrich-Schönleber Estate 90 or more points. The wine writer Jancis Robinson was extremely impressed by the ‘2009 Halenberg Auslese’. 19.5 of 20 points was her verdict which is truly awesome.

Recently we visited the winery. Coming straight from Frankfurt Airport, we drove along the Nahe wine route, passed Bad Kreuznach, and spontaneously dropped in to pick up some bottles of wine.

In the yard, we bumped into Mr. Emrich-Schönleber senior, who was on his way out. In passing he referred us to his wife who was so kind to introduce us to the wines of the estate. Since it was early in the morning, we did not feel like tasting wine (we just came from breakfast in the small town of Sobernheim). Moreover, after many hours of flight, we had just gotten off the plane.

Our selection was quick but firm. I knew some of the ‘grand cru’ locations of Monzingen. After all, I had spent most of my school holidays in the neighbouring village of Martinstein where my maternal grandfather (Hans-Heinrich Schuessler) had introduced me to the amazing world of Nahe wines at a rather tender age.

We chose a nice cross section of Emrich-Schönleber’s wines including two sparkling ones. Ms. Emrich-Schönleber was so kind to add a small bottle of sweet desert wine as a gift. We were flabbergasted.

The bottle of Riesling Sekt (Sekt is German for ‘sparkling’) below did not last long. Only after a couple of hours, when the bottle was sufficiently cold, we opened it to celebrate the start of our holidays in Trier. What an auspicious start to a summer holiday in Europe? 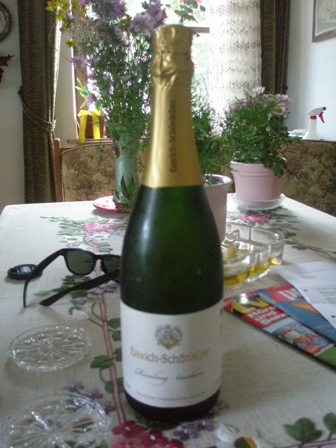 The Riesling Sekt is produced using the classical method of bottle fermentation. Everything is done by hand. Due to the acidity of the Riesling fruit, the wine displays a beautiful spectrum of fine acids. Moreover, it is dry and fruity with lots of fizz. The magnificent minerality of the wine is another characteristic.

Nahe wines, especially the Rieslings, are one of the best kept secrets in Germany. You should visit this internationally little known wine region. It’s just about an hours drive west of Frankfurt Airport. I promise you: you will not regret it.

The new year has started slow for me as a wine blogger. I have a couple of pieces in the making, for instance on my winery tour in Thailand where we visited three wineries and tasted their produce. But reading through the mail on the internet does not lend itself to optimism if you are an Australian vintner like me.

Here are some of the facts, suggestions and ideas for 2010 and beyond:

– rip out 35,000 ha of vineyards to restore a balance between demand and supply

– wine surplus being sold for 50 cent a litre

-medium-sized producers such as De Bortoli Wines (our neighbour in the Yarra Valley) posted a loss of A$ 1.6 million in 2008-2009

– vineyards are unsellable, Cockatoo Ridge Wine, for instance, could not sell its Monash Winery (valued at $14.3 million) in Riverland

– more than 300 grape-grower contracts cancelled in the Murray

I could continue this list of bad news (for instance mentioning the strong Australian dollar) but do not want to depress you further. However, there is good news too. Consumers can finally enjoy good quality wines at much more affordable prices. I can feel this even in my Bangkok supermarket where Australian wines sell cheaper than last year.

I personally think that Australian wine prices were too high in the past. In my native Germany, many family wineries survived on much lower producer prices for many years. In my hometonw Trier you can get an excellent Riesling wine bought from the producer directly for about 5-8 EURO/bottle (A$ 8-12). These are Riesling wines from ultra steep cliffs, and everything is done by hand. On an aggregate, of course, German farmers and vintners are supported by various government subsidy schemes which we (alas) do not have in Australia.

Peolpe who say, that “the Australian wine industry did not know where to stop” are of course mistaken in their analysis. In a market economy the “overshooting” is punished by declning prices and unsold produce which in turn will lead to the reduction in production capacity. But since wine is an agricultural good which relies on a three to four year growing period before you can have additional grapes, the delay in decision-making can be costly.

The “irrational excuberance” was in fact the result of rational decision-making. Investors wanted to make a profit. That some of it was tax-fuelled is proof of irrational government interference by providing wrong incentives (tax credits). The second group party blamed for the glut is “lifestyle winemakers and vintners” to which I also belong. I still hope that my long-term view will “save” me and that I can indulge in grape growing and wine making after my retirement for a couple of more years. Since there is no succession plan, our enterprise might be short lived but such is life.

Cheers folk, after such heavy stuff I need a drink. Maybe, as Jancis Robinson suggest in her latest column, a German Riesling. How about a Forster Ungeheuer from the Pfalz or a Van Volxem Riesling from the Saar?