While in Beijing the other day, I was invited for a meal at Starfish Restaurant opposite the Canadian Embassy. I had been there before but my last visit was some time ago. 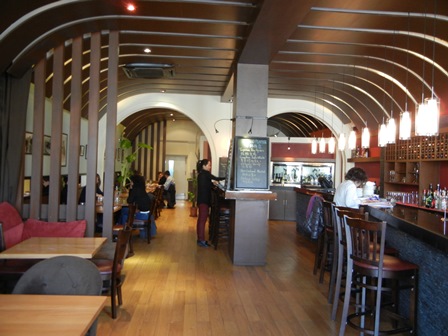 It is a very pleasant place with good service and good food. I ordered one variation of the menu of the day. This usually comes with a glass of wine.

When I later asked the waitress what wine it was, I was surprised to learn that she had served me a Chinese ‘2010 Silver Chardonnay’ from 1421 Wines.

This Chardonnay is a very decent wine and I was pleasantly surprised (see tasting notes). I also love it when food is served with locally grown wine and not some foreign stuff.

In Thailand for instance is it very difficult to have a local wine accompanying the meal. In most places only international wines are on offer. There are some exception from this rule, some of which you can find on my blog.

The other day when I travelLed in China, I realized that there are quite a few advertisements regarding grape wine displayed in prominent public places.

I found some attractive ads on a rotating billboard which I photographed. A glossy airline magazine had also a few ads which I found interesting.

Let us have a look at them.

The first four pictures below show caucasian men looking at wine bottles and/or seem to sample wine. The men are of a mature age and seem to know what they are doing. They emit the scent of experts, professionalism and sincerity suggesting that we the viewers can trust them.

I found the ad for icewine intriguing. The three others deal with red wine, the most appreciated grape wine in China.

The next Three pictures show specific wine brands promoted by the ad. Two of them are for Chinese brands, Chateau Junding and Niya, the thrid is for a French wine Chateau Marquis de Terme, Margaux? The price of 1600 Yuan is not insignificant, but many Chinese consumers go for the most expensive Frnech red wines. As almost everything in China wine consumption is booming. In 2012 China has overtaken the United Kingdom as the fifth largest wine consumer in the world. 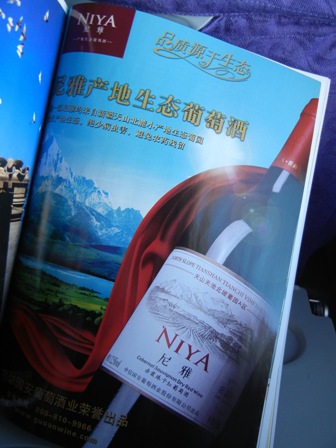 The last two photos from an airline magazine cover a specific winery and wine region and invite people to visit the place. This is wine tourism in the making. 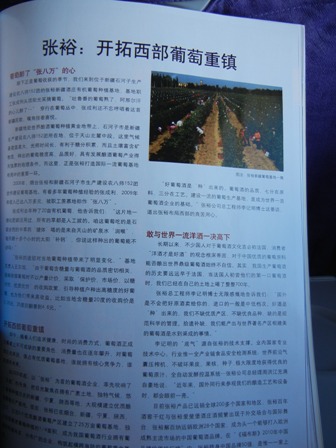 Given the fact that many prospective Chinese investors are visiting vineyards and wineries in Australia these days, and more and more buyers of Australian premium wines come from China, it is worthwhile to have closer look at the Chinese wine industry, wine consumption habits, change of tastes and many other issues related to the appreciation of fine wine.

Another wine experience in China

One of the privileges of a frequent traveller, even if exclusively travelling on economy class, is the use of the lounge. As a “wino” this is great territory to sense and experience some of the global trends in the wine industry and/or the airline service providers.

One such trend seems to be the use of paper cups instead of proper glasses. That’s at least what my recent experience in the business class lounge (star alliance) at Shanghai Pudong International Airport suggests.

I found the “wine ensemble” below. Isn’t it cute?

Wine at your service

I could not resist a tasting of the two wines on offer, a white from China and a red wine from France. Unfortunately I could not find any trace of the French wine in the internet. I had noted down “Tour Gouvercin” as the name of the wine (a Cabernet Sauvignon) which was quite pleasant to drink, fruity with body and structure.

The second wine, a ‘Clos des Chenes, dry white wine’ by Imperial Court, a brand re-designed and re-established by Shenma Winery. The wine was a bit “thin” but since the cooler (as seen in the picture above) guaranteed a pleasant temperature, I found it not so bad, light but technically well made.

My wine tasting at Shanghai Airport

That’s all good news for wine producers and distributors. Also that imported wines account doe only about 11.8 % (2008) of total domestic consumption is “music in the ears” of the non-Chinese wine industry.

Wine educators have their tasks outlined for them as well. Chinese consumers do not like tannins and acids, often perceive grape wines as “sour” only. This is why the mixing of red Bordeaux wines with coke and spite is quite common consumption habit. This needs to be changes, I guess. Since Chinese people have very complex taste buds, it should not be too difficult to make them appreciate the wonders of fine wines.