An “artists lunch” in 798 Art Zone 艺术区 in Beijing, China 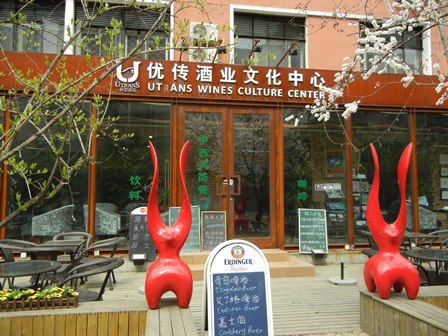 I wanted to visit the 798 artists village since a very very long time but in the past had never found the time to do so. Last spring when I visited Beijing again I especially took time out for a visit tot he many art galleries in 798 Art Zone.

I was particularly interested in the On/Off exhibition at the Ullens Center for Contemporary Art 尤伦斯当代艺术中心（UCCA. The Center had commissioned 50 artists and artists groups born after 1975 to express their ideas about freedom. All of them were born after the so called Cultural Revolution. All of them have grown up in a China of radical change characterized by market reforms and increased individual freedom. On/Off comes from the graphical interface of a common VPN which allows access to the internet and the outside world or not, depending on the speed of the censors and the energy of the user to find the loop.

I just loved the exhibition and the Ullens Center and was glad that I had come. Visiting galleries makes tired and hungry but luckily I found refuge in the above Utrans Wines Culture Center just across the street from the Ullens Gallery. 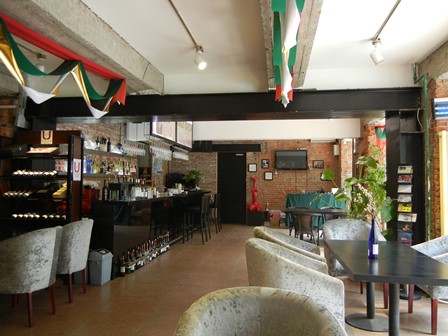 Some of the Christmas decoration was still hanging but the cherry tree outside was in full bloom. Spring was in the air and every body was in a boisterous mood. 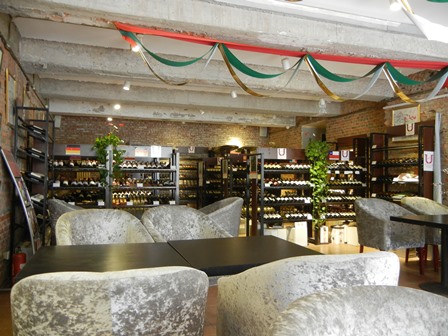 At the back of the place were shelves full with various bottles of wine from various wine regions including Germany. The colours of the decoration suggested that a recent event might have showcased Italian wines. Utrans is a Xiamen based wine importer.

The dilemma of entering such a Mecca of fermented grape juice alone is that a bottle is quasi out of the question, and one has the choice among the house wines only. I settled on a French red. 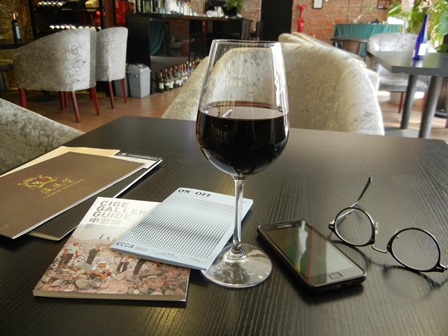 The bottles revealed the following: 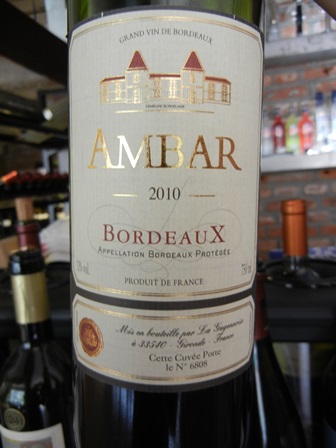 2010 AMBAR Grand Vin de Bordeaux, 13% which was bottled by an winery in Gironde. It was a decent house wine, more pedestrian in character but drinkable with red fruit aromas  and a decent finish.When I later googled the wine I could not find any useful information.

After a while I decided that wine without food would be like sex without orgasm and I had a look at the food menu. I settled for a salad and a salmon pasta. And here as an old China hand I should have been less trusting and/or more knowledgeable. The salad was a positive surprise: the mushrooms were warm which gave the whole affair a special character. The portion was huge. 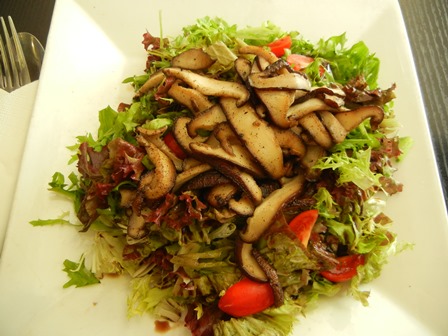 Warm mushrooms on a bed of green salad.

The pasta turned out to be Chinese noodles. The stuff was edible though, but not what the title suggested. What is al dente (?) in the case of Chinese noodles anyway; that’s a no go. The dish doesn’t look to bad in the picture I should have definitely ordered some Chinese food but not pasta. I have only myself to blame. After more than 30 years coming to China I should have known better. 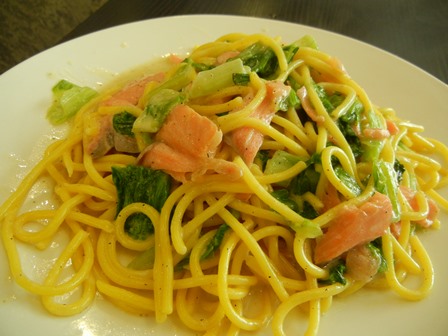 My Chinese noodle dish with salmon

Would I go there again, you might ask? The answer is: absolutely.

The waitress was very friendly, the service good and the atmosphere just right.

I will come again and explore some more of the 798 Art Zone and its culinary delights.

Beijing is awesome. Have fun and explore the 798 Art Zone. It’s worth it.