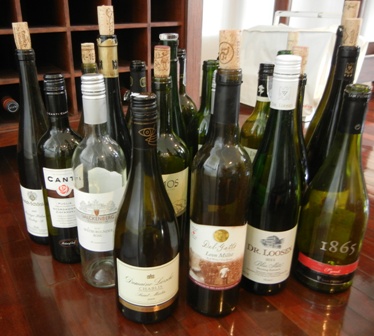 My own flash mob in Bangkok

About a week ago history was made when the first “wine flash-mob” was conducted in Koblenz, and a much smaller one in my home town Trier. I learned it from facebook, and I wished I were there.

Funny is that the word flash of the term “flash-mob” sounds like “Flasche” which translates into German as “bottle”. So it is a “bottle mob”. Indeed about 200 wine lovers followed the invitation in Koblenz and congregated at the “German corner” (Deutsches Eck), a public square, where Rhine and Mosel river merge.

It was maybe the last warm autumn’s day (according to the organizers 21 Celsius) with blues sky, coloured leaves on trees, soft air with the hint that winter was not far away. Jan Wilhelm Buhrmann and Marco Pusceddu from the wine bar “Gavino” in Koblenz had invited to this un-usual event.

The event was part of an initiative by the German Wine Institute (DWI) to promote German wine. The title of the campaign was “become a wine spotter” (or discoverer) and it was conducted in the third week of October. In more than 400 restaurants all over Germany various events were held to promote German wine.

The bottle flash mob in Koblenz, planned for only 20 minutes, muted into a two hour public tasting and wine sharing where German “Gemuetlichkeit” reigned. Great stuff. I hope I can be there when they do it next time.

This entry was posted on Monday, October 29th, 2012 at 5:40 pm and is filed under culture, wine, wine regions. You can follow any responses to this entry through the RSS 2.0 feed. You can leave a response, or trackback from your own site.

One Response to First wine flash mob in Koblenz and Trier