In the morning of August 2nd, we visited Del-Gatto Estates Winery, located in Cape Vesey, in the eastern part of Prince Edward County, Ontario.

It should remain the only winery in the East of the island we had a chance to visit because of time constraints.

The tasting shed looked a bit lost but was easy to find.

Del Gatto Estate is a family business which was established by Pat and Heidi Del-Gatto in 2002. The land was purchased a year earlier. On about 6 acres various grape varieties were planted.

The Del-Gatto vision is “to create quality, hand crafted and distinctive, affordable wines”.

The cellar door with the Italian flag

Inside the tasting shed

Tasting two rosé wines, one three hours the other three days on lees

We tried the Vidal and two rosé varieties as well as the Cabernet Franc. All of the wines were quite distinct from what we had tasted so far. The hybrid varieties make interesting wines, usually with high acidity, a modest fruitiness, a medium body and a not too long finish. It takes a while to get used to their distinct taste but after that….it’s lovely all the way.

Since we could not take many bottles on the plane back to Europe, we decided to buy only two: the Vidal and the Cabernet Franc. The former we consumed with out friends Dominik and Kymm in Stratford, the latter we took back to Bangkok.

On the back of the tasting shed, some of the vineyards are located. We found the newly planted lot next to a well established in the photo one below.

The stony soils are not very deep but mineral rich. Rare Waipoos and Solmesville clays are found in this part of the island. Also terroir and climate are very different in the East of Prince Edward County.

We learned that hybrid varieties do not have to be buried in the ground during the ice cold winter, which is also called “hilling” (covering the vines with soil). This saves about 5000 $ per ha. However, vinifera varieties have to undergo this procedure. The de-hilling takes place at the end of April. It is very labour intensive work.

The annual production at Del-Gatto Estate is about 400-500 cases.

Young grapes on the vines

A bottle of Vidal 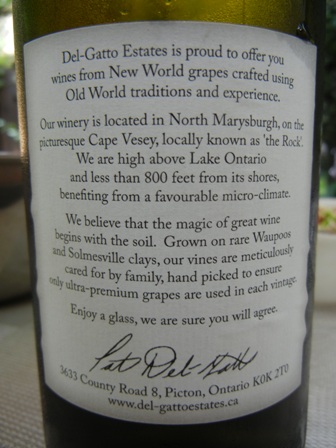 The cellar door staff was very friendly and helpful. We loved this place, despite the little blandness of the surroundings. The exploration of the Eastern part of Prince Edward County was truely enjoyable. You should see for yourself.