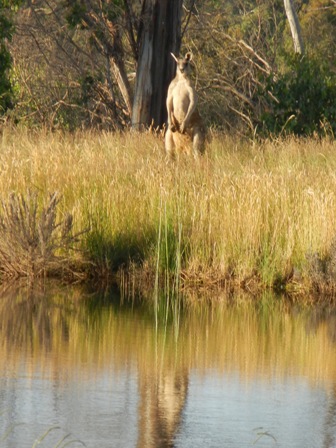 A lone kangaroo on our dam

It is a very strange feeling when you realize that someone is watching you. You might have experienced this yourself. There is an urge to look up and there it is: someone is staring at you with an intensity which makes you feel the stares on your skin. If the other is a human being that’s one thing. But if this other is a kangaroo that’s quite a different story altogether.

It was the last day of our Christmas holidays and we were having a swim in our big dam. After the outside refreshment, we decided to have a kind of pick-nick under the lone tree next to the dam where we took refuge in the little shade the young tree could provide us with.

We chatted and had a relaxing time, suddenly we looked up and there it was: a big kangaroo stood on the bank of the dam watching us intensely.

The wind must have blown our way so that the kangaroo could not identify us. The ‘roo’ could also not see us, because we were sitting in the dark of the shade. It was very quiet and calmly went about its business. We were calm too, no words left our mouths, we just stared back, enchanted by the beauty of the bush.

It was a magic moment, Australian nature at its best, just the right encounter at a last day on the farm before returning to the bustling Asian city which we also call home.

It watched us for quite a while, then hopped along the dam, came down to the water, had a drink and disappeared into the bush and the little wood below the dam. We were enchanted. What a beautiful animal! What a wonderful moment! 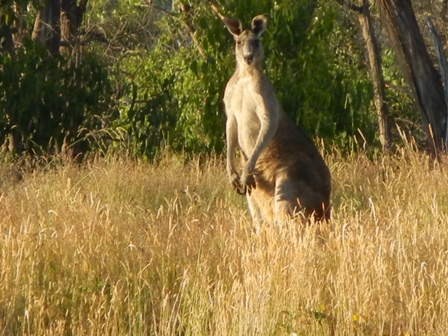 Hopping along the bank of the dam

Have a drink in our dam

Time to move on

When I read in the International Herald Tribune an article on the prospects for the export of Australian kangaroo meat, I was reminded of the above encounter and its magic.

I am not a vegetarian nor someone who cannot live without a steak a day. The Kangaroo Meat Association of Australian, a lobbying group, hopes that global demand can be revived. After Russia banned the import of Australian kangaroo in 2009 the export of the marsupial’s meat had dropped significantly (from about 10,000 to 3,000 tonnes and from 36 to about 12 million A$).

Now there is some new hope that the Chinese, who eat everything with legs, except a chair and everything with wings except air planes, might develop a taste for the hopping marsupial. As always with the China market, export managers make up these wild calculations:

If every Chinese would eat xyz grams of kangaroo meat every, we could sell abc tonnes of additional meat. There are about 1.3 million Chinese consumers. And they hear in their inner ear the dollars chinking.

Last December a delegation from China visited Australia to look at kangaroo meat processing facilities. The industry is awaiting certification to be concluded in a couple of months so that the export of kangaroo to China can begin.

About 27 million kangaroos seem to roam Australian lands. The Australian Society for Kangaroos is not very happy with the prospects of increased exports of the marsupials’ meat. They see the meat unfit for human consumption and fear the extinction of the kangaroo in its natural habitat.

I had my first taste of kangaroo when I was a student at Bonn University. It was offered as a cheap meal in the student mensa. In the early 1990s, Michael, my brother-in-law, prepared a kangaroo steak for me on the ‘barbie’. I liked it and have had the occasional ‘roo’ here and there.

Actually, I find it a quite delicious meat and since I love other game, I love kangaroo too. That it should have a pungent flesh, I cannot confirm. It’s like other wildlife and since it is a herbivore, there is nothing wrong with the meat. My wife is still reluctant though. She vividly remembers her childhood when kangaroo meat was offered at the far end of the weekly food market in Adelaide as pet food only.

One ‘roo’ a year would suffice for our household, I think, if I could just shoot it on our farm from the existing stock. I hope the Chinese do not develop too much a taste for it, because domestic prices for the marsupial might go up. But whatever happens, happens.

This entry was posted on Friday, April 15th, 2011 at 4:27 pm and is filed under food. You can follow any responses to this entry through the RSS 2.0 feed. You can leave a response, or trackback from your own site.