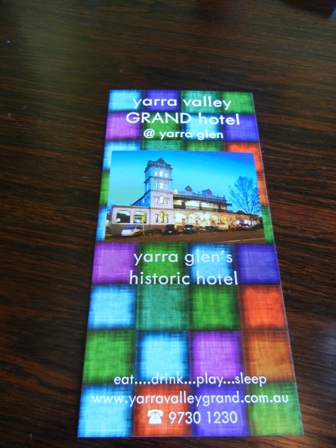 One of the great things in the Australian countryside is the many occasions live music can be enjoyed. From blues to country and western to blue grass and hilly billy as well as jazz and rock, all music styles are on offer.

The last Sunday before my departure I had the chance to listen to Broderick Smith, an icon figure in Australian music and well known for his involvement with the Dingoes, a country rock band from the 1970s. He played together with a guitar player in the Yarra Glen Grand Hotel.

The music was great and I had to buy a CD from Broderick. The atmosphere in the pub was good too. Friends drifted in an out. I missed Australia already before I even left it behind. I love these Sunday afternoons with live music at the pub.

Broderick Smith and his mate