Lunch at Lutter and Wegner in Berlin 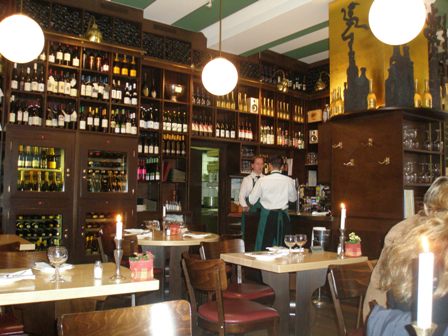 Some time ago when in Berlin I had lunch at Lutter and Wegner in Weinhaus Huth, near Potsdamer Platz. I love the atmosphere of this cosy little restaurant. Lutter and Wegner has two more restaurants I know of in Berlin, at “Fischerhuette”, at the very picturesque “Schlachtensee” (a lake within the city boundaries) and “Gendarmenmarkt” in the centre of town (but there is another one in Charlottenburg). 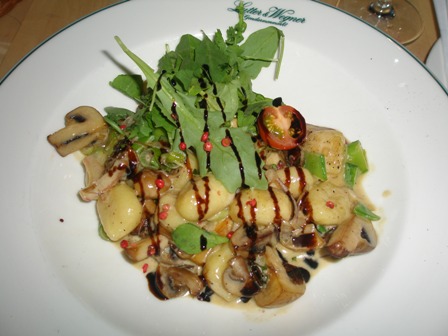 I had ‘gnocchi with mushrooms’ which you can see in the picture above and drank a glass of the house wine, a Riesling from the Rheingau wine region. Needless to say the gnocchi were delicious and the wine was too.

I sat next to the wall where all kinds of German wines were on display. This is why I show you the pictures below. All the good names of German vintners and wine producers were among them, Diel, Dr. Loosen, Joh. Jos. Pruem to name only a few and many others as you can see.

Some time later, I learned from a city tour guide, that “Weinhaus Huth” (wine shop) used to be the place where Konrad Adenauer, the first German chancellor after World War II used to buy his wine.

In March 1877 the wine merchant Christian Huth bought the plot of land and built a villa there which housed also his wine business. The present building dates back to 1911/12 and replaced the villa. It consists of s steel-concrete structure so that the weight of the wine bottles could be stored. This structure protected it from the destruction of two major wars.

The building was the last old structure at the Potsdamer Platz and therefore it was called “the last house at Potsdamer Platz”. That was during the time of the cold war and before the wall came down. After 1989 and the reunification of Germany the Potsdamer Platz was again situated at the centre of the city and a building boom started. In 1990 Daimler-Benz AG bought the building. After renovation it was transformed so that again a restaurant could move in again, which is Lutter and Wegner. If you visit Berlin, I highly recommend that you visit “Weinhaus Huth” or any other of the Lutter and Wegner restaurants.