I arrived from Bangkok on a bleak and cold morning in the middle of March. Three degrees Celsius but dry conditions, is what the pilot predicted. Well, what a chilly morning here in Frankfurt. Where was spring, I thought. 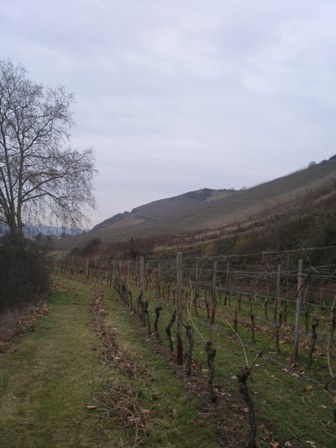 I decided against the train, rented a car and drove off to the West. When passing the city of Mainz, I decided to go along the Nahe river, the birthplace of my father. It’s a lovely place. The Nahe is a little know German wine region. I will write a separate blog entry to tell you more about this jewel of a wine region. The Nahe region is very deer to me.

I passed the town of Bad Kreuznach but stopped in Bad Sobernheim. There a strolled through the small town just to move my legs little. It was 7 h in the morning, people were on their way to work. I was greeted by all the people I walked past. That’s the charm of those little German places. 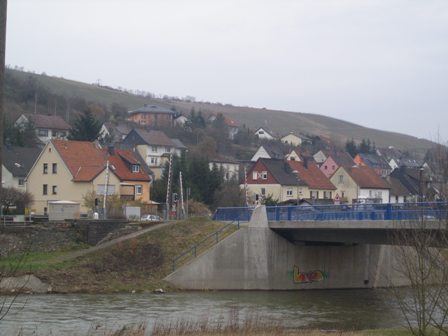 Martinstein, river Nahe and vineyards in the back

I spent almost all my childhood holidays in the house of my grandfather in a small hamlet called Martinstein. Here the last vineyards are to be found. Further West are only rocks and forests. I paused and paid a visit to my grandparents grave. When overlooking the surrounding hills vivid memories of my youth danced before my inner eye. I remembered that my grandmother took me to fetch the milk and that I could never get enough from watching the cows and that I had to be taken by force to come home. I also remember rides on horse carts and later the first tractors. 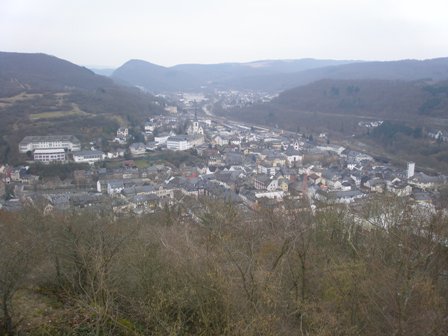 The city of Kirn

My last stop was in Kirn, a small city and the birthplace of my father. This is a beer drinkers place since the famous Kirner Pils is (or was?) brewed here. I went to Dhauner Strasse to see the house were my father was born and where he grew up. From the castle, the Kyrburg, I took a good look around before heading through the mountains (where I found a lot of snow) to the Trier and the Mosel Valley.