Recently friends in Beijing invited me to a fancy place for dinner. Da Zhai Men – 大宅门, or as it is called in English “Grand Mansion Business Club” (Chinese style) or 大宅门中式餐饮会所, that’s what the brochure says.

The place is a kind of replica of a Ming and/or Ching dynasty style eating place. The decoration is amazing. Though housed in a modern, glass walled, high rise building, the internal architecture makes you feel having entered a distant, forgotten but very exotic world, a world you otherwise see only in historical epic movies or kung fu films.

The entrance is styled as a gate to a compound, a kind of “se he yuan”, or four wing traditional house. I felt like “abducted” into a forgotten world. The restaurant staff is clad in outfits which might also come from the good old times of imperial China, very colourful costumes. I cannot judge their authenticity but I liked the combination of fur, colour, patterns and ornaments. The ambience of the place makes you forget the grim reality of a cold November evening in the capital city of the fastest growing economy in the world.

We had booked a separate room at the second or third floor. We went around one corner after the other until we were led into a cosy little room decorated in the same style with some modern elements. For instance the pictures were framed in modern golden coloured frames depicting modern scenes. The furniture was wooden, wooden were also all the screens and panels, a window simulation was hung with a long brown cloth. The crockery on the table was equally colourful but was not for use. 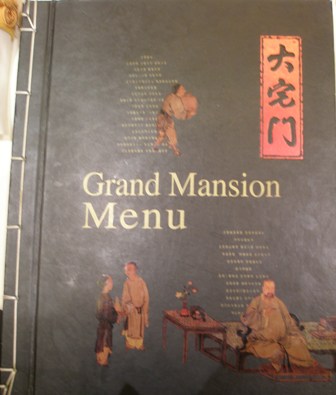 The menu consisted of a big, equally colourful book with excellent quality photos of the various dishes on offer; captions were in Chinese and English. The photos were interspersed with explanatory texts and pictures of various motives, reproductions of old material on ingredients and the history of the dishes.

The mansion offers “aristocratic” cuisine whatever that might mean, in contrast to royal or simple peoples cuisine. Instead of a regional denomination, the mansion praises itself for creating “modern Chinese fusion” dishes which attempt to blend various traditional and modern influences into new harmonies. To say it from the outset, the food was excellent. 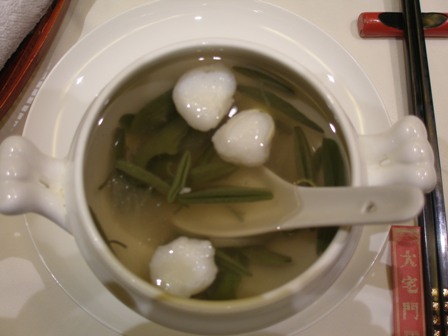 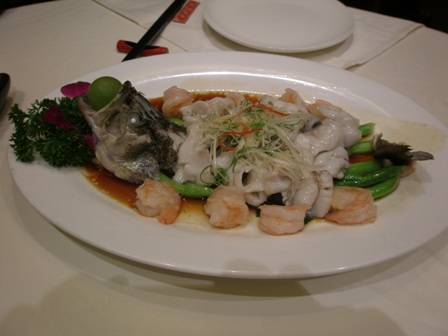 For my wine drinking friends, the fact that we did not have wine with our meal might come as a disappointment. So I have no clue what the wine list looks like. Instead, we drank some of the finest tea China has to offer, a dark coloured tea from Hangzhou called ‘West Lake Dragon Well tea’.

The event did not lend itself to picture taking. I dared to take only a few but in order to not create too much disturbances I quickly put away the camera. But rest assured the food was exquisite. The Mansion is a dining experience of the noble kind indeed.

This entry was posted on Friday, December 12th, 2008 at 7:25 pm and is filed under food, history and culture. You can follow any responses to this entry through the RSS 2.0 feed. You can leave a response, or trackback from your own site.