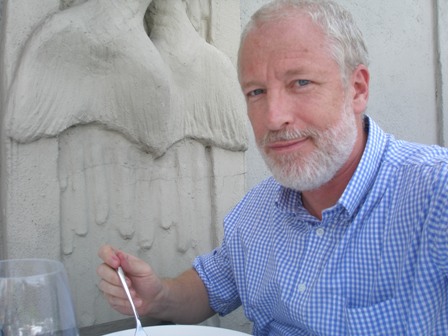 You might have sensed it. I was away for more than two weeks. Work took me to Germany and I had no time for blogging, only work, work, work. But fortunately, there were some occasions to taste good wines and enjoy some marvelous German food. More about this later.

In May the weather in Germany was much better than in March or April during my previous visits. The temperatures were very pleasant. The sky was always blue, everything was green, nature at its best.

The trip took me from Frankfurt to Bonn, Berlin, and Munich. For the first time I went by train from Berlin to Munich and from there back to Frankfurt Airport.

It was a lovely ride, the fields were green, acacia trees, linden trees and chestnuts in full bloom, farmers cutting grass to make hay, young barley, wheat and rye growing nicely, canola (rape seed) already advanced just after blooming, young maize plants just 10 cm high. Only here and there one could spot some cattle in lush paddocks. The German landscape seemed almost void of people although the country is much denser populated than Australia.

The six hours on the train were very enjoyable. I spotted the last vineyards in the Saale valley. When crossing the Hallertau, a couple of hours north of Munich, I saw huge trellis systems for the cultivation of hops for beer production. The next vineyards I should see were near Stuttgart when the train moved on to Mannheim and finally Frankfurt.

No I am back in steamy tropical Jakarta and we are getting ready to move to Thailand at the end of August. By then it’s 10 years that we lived in Indonesia, a decade of my life. Time passes. I am afraid that the next months will not allow me to write much since so many organizational tasks await me here. Bare with me.

This entry was posted on Friday, June 6th, 2008 at 4:01 am and is filed under general. You can follow any responses to this entry through the RSS 2.0 feed. You can leave a response, or trackback from your own site.