You might remember that I introduced a while ago to you the brothers Consigli from Scarperia, Italy (www.conaz.com) and their knife-making art.

When I browsed trough the many photos I have on my PC the other day, I found two copies of vintners knives from Roman times unearthed in the Mosel River valley.

In the “Bacchus and Sucellus” book of Karl-Josef Gilles (Rhein-Mosel Verlag, Briedel, 1999, pages 61 and 62), two forms of vintners knives of the Roman times are shown.

The first type is for pruning, it is massive with a broad blade and a small pruning chisel on the backside. The second type was for harvesting grapes and looks like a sickle. It is slighter and finer. Also a knife which was slid over a finger was found and used for the same purpose. 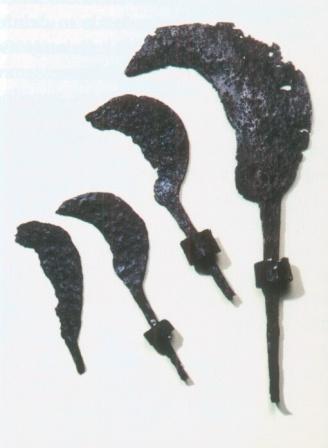 Most likely from tomorrow onwards I will be pruning vines in my own vineyard in Glenburn, Victoria. I will be back in August. Have a good time and drink some bottles of fine wine, somewhere with someone you like (should not be that difficult).

Postscript: I was made aware by Bob Burgess that the back of the pruning knife consists of a small pruning chisel and not a hammer knob as I have mistakenly believed. Thanks Bob for the correction of this error. Please visit also Bob’s very interesting webpage (www.billhooks.co.uk) on early edge tools.

This entry was posted on Wednesday, July 11th, 2007 at 9:28 am and is filed under history and culture. You can follow any responses to this entry through the RSS 2.0 feed. You can leave a response, or trackback from your own site.

2 Responses to The vintners knife II