Excursion along the Rhine: Weingut Sülz in Oberdollendorf

Carpe diem, ‘enjoy the day’ was the motto my wife suggested I should adhere to, while away from home for the two-month long stay in Germany. I try to follow this advice and make the best out of the separation from my family. Recently I visited a place of my youth, so to speak, from my student times at Bonn University. We used to visit a wine garden-paradise called “Weingut Sülz” (Sülz Estate) in Oberdollendorf near the Seven Peak Mountains (in German, Siebengebirge) on the south side of the Rhine river near Königswinter.

The Dragon Rock Mountains seen from the Rhine river

The cultivation of grapes and the production of wine have a long tradition here, dating back to the 10th century. In the 14th century ‘Gut Sülz’ (the Sülz Estate) belonged to the nearby monastry of Heisterbach. A country inn was established in 1656. The estate changed hands a few times. Today Weingut Sülz is neither a vineyard nor a winery, but a lovely country inn with a large open-space garden for its many visitors.

The location is splendid, featuring a beautiful view of the surrounding vineyards. The inn is to be found at the foot of the Sülzenberg, a vineyard location in the form of a theatre at the edge of the Seven Peak Mountains, south of Bonn. The vineyards might be the most northerly ones along the Rhine. Since land consolidation in 1973 and 1979 all vineyards in the theatre have been cultivated by the Blöser family (more about them in a separate later blog entry). 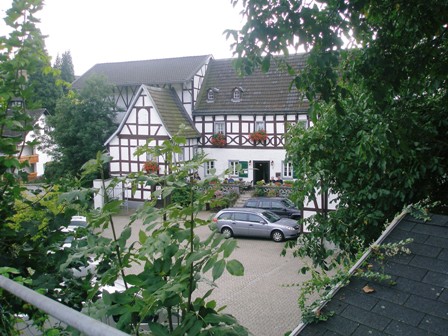 Since 1999 Andreas Lelke has been running the Weinhaus Weingut Sülz (www.weinhaus-gutsuelz.de). His list consists of more than 500 wines and has received multiple awards. His white wine list is dominated by Riesling wines. In 2000 the Riesling Society awarded Andreas Lelke its Riesling award. The German Wine Institute ranked his wine list as “very good” and the Wine Guide Gault Milau awarded its “best wine list” in 2007 to the country inn. It goes without saying that delicious food is served with the wines at Weingut Sülz. 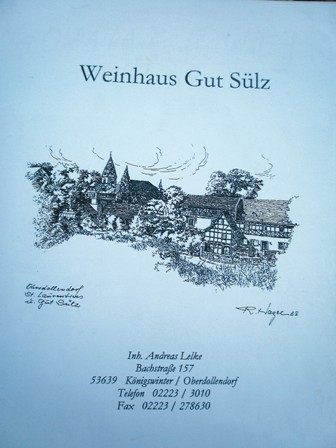 “What did I drink?” you might ask. Well, during my first visit I sat outside on the terrace and felt like drinking what the hill behind the inn (the Sülzenberg) had to offer. I had a choice between a Sülzenberg Riesling and a Sülzenberg Blue Portugese (Blauer Portugieser in German). I choose the latter. ‘Blue Portugese’ is an old vine variety grown mainly along the Danube river and in South-Eastern Europe. The variety has many different names in the various places it is grown. However, it has nothing to do with Portugal. I cannot recollect ever having drunk the variety before, so the tasting was a ‘maiden affair’. The picture below shows me with a glass of this dark red, but light and fruity wine in my hand. I took the picture myself, which might explain the strange posture. 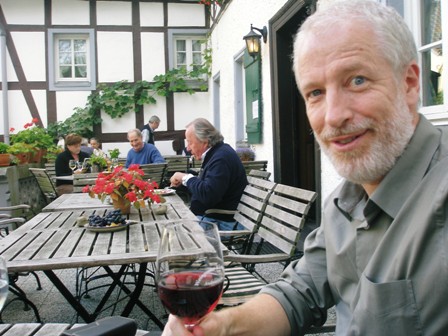 This entry was posted on Friday, October 12th, 2007 at 5:08 pm and is filed under food and wine, vineyards, wine regions. You can follow any responses to this entry through the RSS 2.0 feed. You can leave a response, or trackback from your own site.

13 Responses to Excursion along the Rhine: Weingut Sülz in Oberdollendorf