I would like to share with you some of my culinary experiences in Germany. Below you find a select few of the dishes which I had the great fortune to enjoy recently. Some of the wines I had with the food are less memorable than others, therefore don’t worry about it. I have prepared some photos. 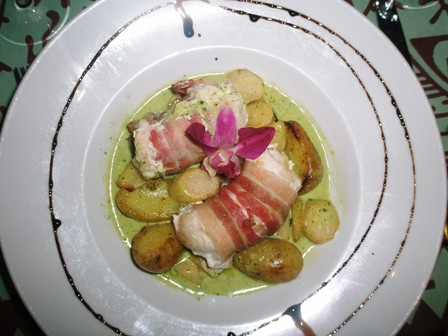 This is a very special combination. When I tasted such dishes for the first time I was quite puzzled. Germans living near the sea know them quite well but since I am a native of the deep South-West, I was rather a novice when it comes to German fish eating habits.

I would like to share an anecdote with you. I once accompanied a group of Muslim politicians to the most northerly state of Germany (Schleswig-Holstein). In Kiel, the state capital, we had ordered a filet of plaice (a local flat fish) “Finkenwerder Art”, me not knowing that this white fish is sprinkled with bacon/ham crumbs when served. The order was utterly inappropriate for pious Muslim adhering to halal food prescriptions. That’s when I learned that Germans do eat fish dishes with pork.

Pasta with scrimps (at Rolandseck Restaurant near Bonn)

In Berlin I tasted beetroot soup with goats cheese and orange slices in an inn called “Feuerbach”. Unfortunately, I started to eat before realising that I should have taken a picture of the delishes meal before digging my spoon into it. I apologize for that but the soup was so delicious that only immortals could have gotten it right. I promise to visit “Feuerbach” again and replace the picture with a “proper” one.

So far so good you might say but what did he drink with all these dishes? Well, mostly white wines from Germany but not entirely. I drank an Ahr Riesling of the winehouse Meyer-Näkel with the fish in bacon, had an 2005 Heimersheimer Pinot Noir with the seafood pasta, and since at vintage time Germans love to drink “Federweisser”, freshly fermented grape juice (see photo below), I tried some of this rather young and sweatish drink with the Alsacian Flammkuchen.

A bottle of “Federweisser”, not a drink common in Australia.