The first time the river Mosel is mentioned in a written document is the account of Gajus Julius Caesar in his De Bello Gallico, IV in 55 B.C. where he describes his battle and the subsequent victory over two German tribes, the Usipeter and Tencterer. Around the same time we also learn about the original settlers in the Mosel river valley and around Trier, the Celtic Treverer.

“The Treverer are cleverer” sounds a line in a popular song of a local rock music group called “Leiendecker Bloas”. But not only that. The Treverer were feared by the Roman invaders as well.

This is what Marcus Tullius Cicero wrote to a friend during Caesar’s war against the Treverer in about 55 B.C. In a free translation that reads as “better avoid the Treverer; they go for your throat. I wish those guys would rather work as silver and gold smiths”. The Romans in fact had some troubles in controlling the Celtic population of the Mosel valley. In 69/70 A.D. the Treverer revolted against the imperialists from Rome but were defeated again. The Roman general Petilius Cerealis did not lose his composure in battle despite the fact that his cavalry was already wiped out, his camp fortification destroyed and the walls overrun by the fierce Celtic fighters from the Mosel.

But over the decades that followed the Celtic swineherds were transformed into vintners and the people thanked the god of wine – Sucellus – for this. The Treverer were known to be hungry for fame, quarrelsome and rowdy. They were also known to be big drinkers, more so than even the Germans. The many drinking competitions they held are ample proof of their favourite pastime. The ones who could not drink were despised as weaklings. That people could call themselves lucky if they got away alive from those fierce drinking competitions, was a common notion. That’s how it was: The good old days. These times have long gone and modern man does of course some drinking here and there but we are all more or less domesticated in some way or another. We go to work 5 days a week. We do sports in our free time, watch TV, send sms and e-mail, write blogs and so on.

Joseph Roth in “The Radetzky March” describes the changes at the turn of the 19th to the 20th century but his description can certainly also be applied to earlier times and ages.

Everything that grew took long to grow
and everything that ended took a long time to be forgotten.
Everything that existed left behind traces of itself
and people then lived by their memories,
just as we nowadays live by our capacity to forget,
quickly and comprehensively. 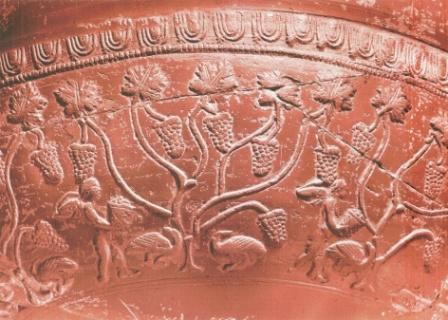 Vinum vires is what the Romans said, wine gives power! My suggestion for the day: open a bottle of your favourite wine and enjoy the Sunday.

Bene tibi sit “Wohl bekomms” or To your health, salute, cincin and so on

This entry was posted on Sunday, February 4th, 2007 at 5:34 pm and is filed under history and culture, vineyards, wine regions. You can follow any responses to this entry through the RSS 2.0 feed. You can leave a response, or trackback from your own site.