The Nahe wine region has a great significance for me and my family. It was here that I got first into contact with vine cultivation and wine appreciation at a rather tender age.

Why you might ask? Were you not from Trier, Mosel?
Well, my maternal grandfather, Hans Heinrich Schüssler, a native of Reichenberg, a village near Würzburg, used to live in Martinstein. Being from Franconia, another famous German wine region, he was the only wine drinker in the immediate family (my father preferred beer). He used to be the station master in Martinstein (today 322 inhabitants), a hamlet along the left bank of the Nahe river. The village was founded in the middle ages at a ford crossing the Nahe river. In 1340 it got a castle and even market (city) rights.

My brother and I, we used to spend the long summer holidays (and many other holidays) at my grandparents house in Martinstein. My grandfather used to take us on long walks in the forest and villages nearby. During these walks we always found a country inn where we could refresh ourselves, enjoy a drink or a “Brotzeit” (a typical German snack). He would drink a “Schoppen” (0.25 litre glass) of the local Nahe wine. He loved dry white wines. We would have a lemonade.

He was associated with a “hiking brotherhood” (called “Hunsrückhöhenverein”) whose members would walk in large groups on weekends to various destinations. Usually a country inn was the designated object of the hikers. Here the group converged for a hearty meal and some drinks. Shortly after vintage, “Federweisser” (freshly made but still half-fermented wine) was a popular drink.

But boys being boys, we would sip at his glass from time to time. He being deeply involved in conversation with fellow hikers, did not notice. Neither did we. The sweetness of the fresh wine veiled its dangers. To cut a long story short, we had the experience of a first inebriation of our young lives and could hardly walk strait on our long way home.

After my grandfathers retirement he moved out of the train station into a newly built home right in the middle of vineyards at the outskirts of the village towards the east. Vineyards stretched right to the door. Just a short walk up the hill and endless vineyards lay at your footsteps. Occasionally we would help during vintage time (more play than serious helping). But we would often taste fully ripened grapes and enjoy the fruit. I treasure these wonderful memories of my youth at my grandfathers house in Martinstein.

As you can see from the above map, the Nahe wine region stretches from Martinstein to the West along the river eastward, later north towards the estuary at Bingen where it flows into the Rhine river. The largest city in the region is Bad Kreuznach, a small town of about 45,000 inhabitants. 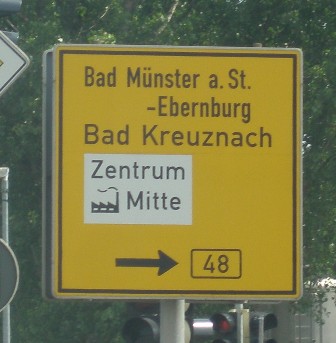 With about 4,200 ha under vines, the Nahe region is one of the smaller wine growing areas in Germany. It is still larger than, for instance the Yarra Valley in Victoria (with about 3,800 ha, about 2% of Australia’s total). The Nahe region is dominated by white grape varieties (about 74% of the total area under vines). The main variety is Riesling (26%) followed by Mueller-Thurgau (14%) and Dornfelder (13%).

Fifty years ago the variety distribution was very different. Silvaner used to be the most planted variety with about 50% of the total area but has ever since been replaced by the Burgundy varieties (Pinot White, Gris and Noir) as well as by Riesling, Dornfelder, Blauer Portugieser and Müller-Thurgau plantings.

The Nahe is divided into seven collective sites (Grosslagen) and 328 individual sites (Einzellagen). Due to its volcanic origins, the soils of the nahe show a great diversity. The wines reflect this. Only in 1971, the German wine law defined the nahe region. before that time, its wines were sold as “Rhine wines”. However, some of the best Riesling wines of germany originate from the Nahe and today Nahe wine can rival the best from Mosel and Rheingau or any other German wine region.

The Nahe can be divided into the upper (west) and lower (north-east) Nahe and the region around Bad Kreuznach. In Martinstein and the neighbouring village of Monzingen (first mentioned in 778) the oldest vineyards of the Upper Nahe are to be found. The soils of the Nahe range from sandstone to quartzite and slate. The region shows a temperate climate and some of the southern slopes enjoy a micro climate comparable to the Mediterranean. Elevations range from 100 to 300 meters altitude.

Who are the top producers of the Nahe wine region?

Well, the name Herrmann Doenhoff comes to mind. He is the leading vintner of the Nahe and his wines are ranked among the top Rieslings in Germany. Herrmann Dönnhoff has about 20 ha under vines and produces about 140,000 bottles a year. His winery is located in Oberhausen/Nahe. The 2007 vintage produced outstanding wines; the 2008 Riesling wines did not quite reach that quality level during recent tastings. But his ‘2008 Niederhäuser Hermannshöhle Riesling Gran Cru’ earned 93 Parker points.

Other top producers are Emrich-Schönleber in Monzingen (about 15 ha under vines, yearly production about 110,000 bottles), Schlossgut Diel (17.5 ha and 120,000 bottles) in Rümmelsheim and Schäfer-Fröhlich (14 ha under vines and 75,000 bottles annually) in Bockenau.

Wines and vintners I like very much are Sascha Montigny in Laubenheim and Weingut Edelberg at Gonratherhof 3 in Weiler just on the other side of Martinstein. The former I like because of the high quality of his red wines, especially the 2006 vintage; the latter produces solid country wines which remind me of my youth in Martinstein and the long hikes with my grandfather. The country inn at Gonratherhof was often our destination when the three of us set out from our little house in the vineyards.