One of the loveliest little towns in northern Alsace is Wissembourg. During my recent visit to the Palatinate (Pfalz), the German wine region just north of Alsace, we did a side trip to see this picturesque place.

We had come after lunch just to have a little walk around town. It was a pleasant spring day with mild temperatures and some sunshine although heavy rain clowds graced the sky.

Wissembourg has about 8,000 inhabitents and was the location of various battles fought in the French revolutionary wars in 1793 between French and Austrian, Prussian, Bavarian, Hessian and other German forces. After the second battle of Wissembourg, France was able to take over the whole of Alsace. In 1870 the tables were turned. This time the Prussian forces won and made their way to Paris.

I remember that during my student days at Bonn University I once attended a play by a theatre group from Alsace. The play depicted the history of the region and how it moved from being indpendent to becoming a part of France and Germany, but that the people remained the same.

The following pictures will give you a rough idea about Wissembourg, but I suggest you go and see for yourself, stay a couple of days to also indulge in the food and wines of Alsace. 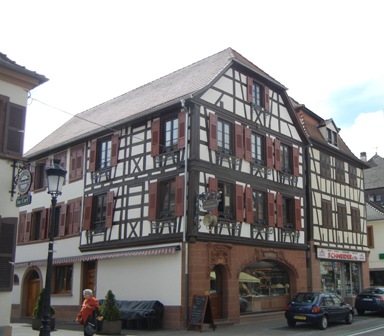 About twenty years ago when I came to Wissembourg for the first time with my wife Margit, we almost bought a half-timbered house. We were so enchanted by these houses, that we almost could not resist to invest in such a house. They were not expensive at the time, 80-90.000 Deutschmark only. Since my brother lived and worked jsut a little north of France in southern Palatinate, we thought he and his family could live in the house. But it did not work out and we discarded the idea.

The stream crossing the town is called the “Lauter” 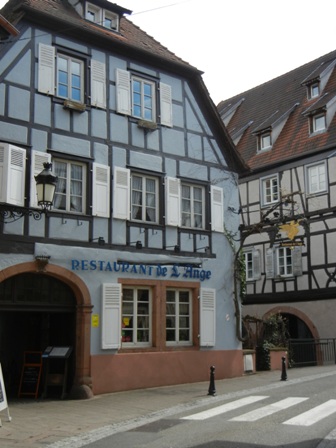 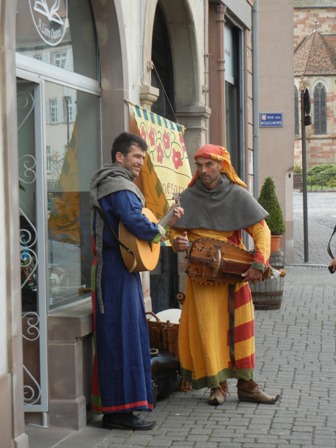 Medieval music was presented by these two bards

“Winstub” is what the sign says in the local dialect. It means wine bar 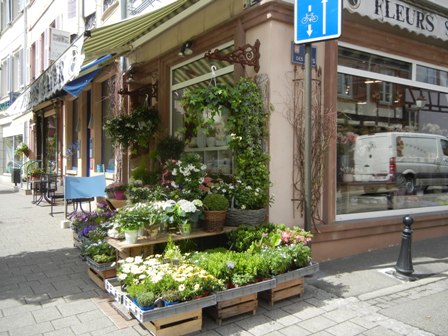 Various types of bread and cake were on offer

Of course wine was everywhere. I did not buy any since I had to travel and drag my suitcae around. And wine is, unfortunately, very heavy.

But I will come back to Wissembourg, that’s for sure. Maybe next July when I spend some time in my home town Trier. Not far from Wissembourg is my favourite restaurant, “Auberge du Cheval Blanc” in Lembach in the Vosges mountains.

Spring blossoms all over the place

This entry was posted on Thursday, May 10th, 2012 at 1:05 pm and is filed under culture, food, wine. You can follow any responses to this entry through the RSS 2.0 feed. You can leave a response, or trackback from your own site.