Traveling through Canada, my wine of the week is the ‘2008 No. 99 Wayne Gretzky Chardonnay’ which we drank the other night at my friend Dominik’s house in Stratford, Ontario.

It is well known that not only dentists and medical doctors get lured into the wine business but also sport stars. Wayne Gretzky the famous Canadian ice hockey player being one of them. His winery, the Wayne Gretzky Estate, which opened in 2007, is located on the Niagara Peninsula, Ontario. 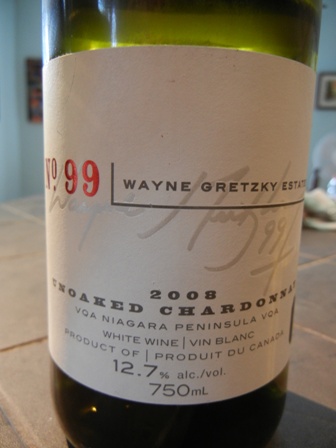 This unoaked Chardonnay is a very pleasant wine. We had it with a pizza. The wine has all the good characteristics of a good ‘Chardy’. It won some awards (silver and bronze) as well. I liked the peach notes and the fine balance of acids. It is also a very affordable wine (12.95 Canadian $). We had great pleasure sampling it. 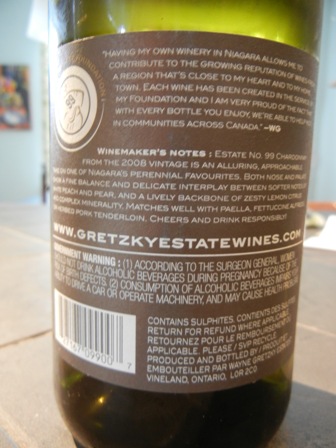 Where men are men

We had breakfast at the Moose Cafe in Dwight, near the Algonquin Park in Ontario, Canada. And what did we find on the table?

“Mansauce”, it was called, the “manliest condiment”. That’s quite a promise. Unfortunately, we are coming from Asia and used to hot stuff.

Sweet chili sauce comes to mind after I tasted the “manliest of the condiments”. Bring on the hot stuff Canada. But of cause we are having a great time up here in northern Ontario.