Robert Burns, the portrait at the entrance of the hall

About 100 diners, mostly Scots and their friends, had gathered in the Amari Watergate Hotel in Bangkok to celebrate the 250th anniversary of the birth of Robert Burns, Scotlands national bard and its most famous poet. Every year thousands of Scots people worldwide celebrate the life of this great man. This year’s 250th celebration was of course very special.

That was also true in Thailand. The Bangkok St. Andrew’s Society and its chieftain, John McTaggert, had invited to an evening of celebration, and a celebration it was. Our friend Rab Thomas had gathered a group of friends and we were the lucky ones to join in. 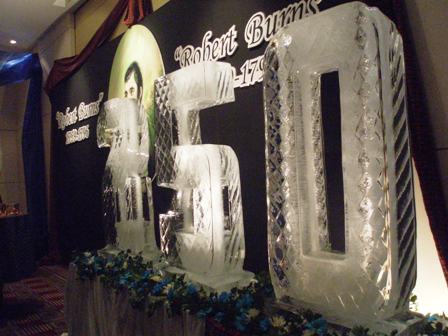 The members of the Bangkok St. Andrew’s Society had ample opportunity to show their talents. At past Burn’s Suppers in Jakarta, a Robert Burns impersonator was invited. Though his presentation of the poems and hymns was very professional, it somehow deterred the members of the local society to take the recitations on to themselves. 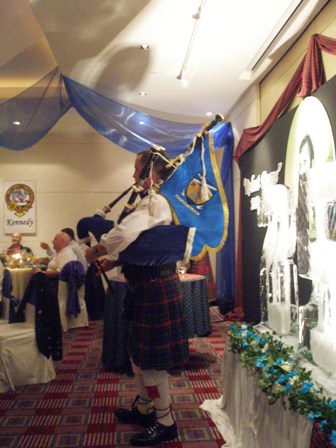 Mike Brooks did the piping

There is obviously no shortage of talent in Bangkok. The Selkirk Grace was spoken by Willie Christie. When the haggis was presented and stirred, Mike Brooks spoke the address to the haggis. Duncan Niven gave ‘the Immortal Memory’, John McTaggert the ‘toast to the Lassies’, and Louise Blackwood ‘the Lassies Response’. All the speeches were presented in a very witty, pithy, funny, sardonic and enthusiastic way. It was such a pleasure to listen to them.

Also the haggis with tatties and neeps was very good. I enjoyed again the wonderful Scottish cheeses. The wine came from Australia and was quite decent. It belonged to the, what I call, “industrial wine” category. There is no harm in drinking it, just the brand name never sticks.

After dinner we went all outside to bid farewell to the British Ambassador, made a circle, held hands and sang together “Auld Lang Syne” („old long since“). I recognized the song immediately, because its German version (“Nehmt Abschied Brueder”/ farewell brothers) is very well known in my native lands.

I vividly remember when as a boy I first heard the song from our kitchen window. A group of pilgrims had gathered in front of our house in a circle and sang “farewell brothers”, before boarding their buses to take them home.

When we held hands in Bangkok and sang Burn’s song, the magic also worked on us. It is a powerful song, even in German, though the German text is quite different from the English or the Scottish version. What I did not know is that the song was written by Robert Burns. In life learning never ends.

When Robert Burns died at the tender age of 37 in 1796 he left behind 13 children from 5 women. That’s quite an achievement. Obviously Burns loved women and ‘love’ was one of his favourite themes. This is why I present to you Eddie Reader and her version of “My love is like a red red rose”.

Cheers to Robert Burns. See you next year at the Burn’s Supper.

This entry was posted on Monday, January 26th, 2009 at 10:39 pm and is filed under history and culture. You can follow any responses to this entry through the RSS 2.0 feed. You can leave a response, or trackback from your own site.