The Christmas Market in Trier 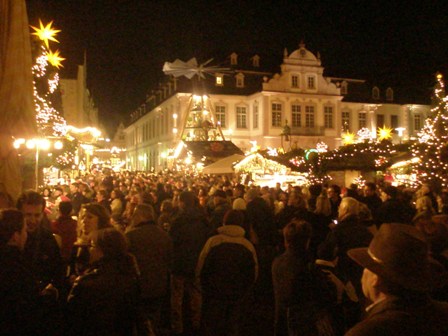 I had only about 24 hours for a family visit in Trier, my beloved home town. This is not much time and I needed to buy urgently some supplies. I was in a hurry which is not good when you end up in a Christmas market. Gee it was crowded. I had not expected so many people. After all the media lamented the economic crisis, the downturn, the loss of jobs and income in short a dark and insecure future. Nothing of that could be felt at the Christmas market in Trier. It was packed with people. I was pushed through the masses. One could hear many languages, French, English, Dutch, Luxembourgian and various German dialects. 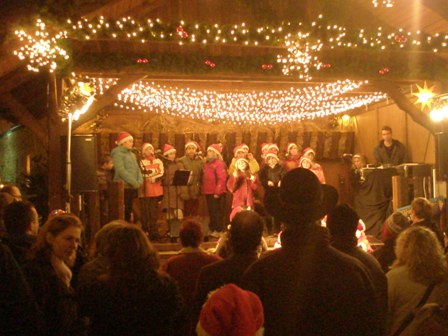 We have learned from other economic crises that people try to forget the dire circumstances by celebrating even more and more intensely than in “normal’ times. Well, that must have been the case in Trier as well. Everywhere people were drinking mulled wine which is good against the cold but also beer and “normal” wines were on offer. It was a cheerful mood; joyous and happy faces wherever I looked. The pictures above and below give you an idea. 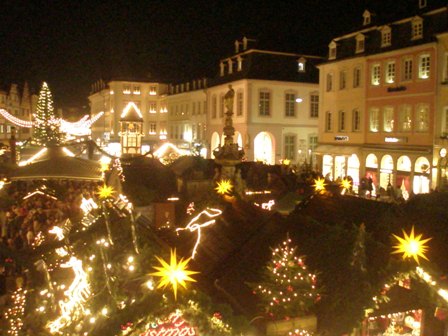 St. Peter must have been happy too with all these many cheerful Christmas shoppers. After a bath in the crowd I sought refuge in a quiet place and escaped to one of my favourite watering wholes, the wine bar Kesselstatt. I ordered a ‘2007 Kaseler Nies’chen Riesling’ from the Ruwer river, a tributary of the Mosel and listened to the conversations of my neighbours.

It’s good to be home and Christmas is an auspicious time. I let myself be taken in and my mind flowed through the narrow lanes and back streets of the old Roman town. I could smell the smells of my youth and saw faces of people long gone. I dreamt myself away for a while before strolling home. It’s s pity that 24 hours have only 1440 minutes.

This entry was posted on Monday, December 15th, 2008 at 1:08 am and is filed under history and culture. You can follow any responses to this entry through the RSS 2.0 feed. You can leave a response, or trackback from your own site.