I had the great chance to spend a weekend in Munich, the capital city of the state of Bavaria. The weather was splendid; it was the first weekend of June. Of course I had some to work but fortunately there were a couple of hours which I used to explore the surroundings. I just walked through the city and enjoyed the cheerful atmosphere. Of course I had also food and drinks in mind.

People over people in the English garden in Munich

Unfortunately my small camera could not capture the atmosphere there. There were lots of people as well. Numerous stalls sold all kinds of Bavarian food and drinks, mostly beer in big and super big mugs or beer based mixed drinks. For instance one could order a “Russian” which is a mix of wheat beer with white lemonade, a nice drink to quench your thirst and thats what I did. There were horse carts, people on bicycles, and children on skate boards. There were street musicians along the wayside, larger and smaller groups of tourist and day visitors from all over the world. Here and there one could spot the odd local Bavarian, men dressed in the traditional ‘Lederhosen’ (leather pants) and women were dressed in elaborate ‘Dirndl’ outfits.

Munich is not exactly known as a wine growing region. Helas, there was also a part of the garden where a vintner from Franconia offered his wares, in this case delicious wines from this northerly part of Bavaria. “My heart jumped in my chest”, as we Germans say. here I had the opportunity to be regaled by the very wine of my mothers homeland.

The vintner was Roman Sauer and his family from Nordheim in Franconia. They were very friendly and cheerful. For my next visit to Franconia I should schedule a tasting!

I first tried a Sylvaner (fresh and dry), then I moved on to a Riesling (crisp, citrus and apple aromas) and the last wine I tasted was a red wine (see the picture). Well, and now I face a memory lapse. Moreover, I cannot find my notes. I do not remember what it was. The colour is a deep and beautiful red. It should be a Pinot Noir but it could have been something more “exotic”. Needless to say the wines were all well made and delicious.

I would have tasted the rest of Roman Sauer’s wines on offer but that was just too difficult in the heat. The sun was shining on me and the three large glasses of wine had their own effect. The Bavarian music was entertaining, the beer garden visitors were loud and cheerful, and somehow I made my way back to the small hotel in Munich-Riem.

Below the flyer I collected which depicts Roman Sauer and his family. There was not much opportunity for a chat because the garden was so buy, guests coming and going. Unfortunately, I could not find a webpage of the Sauer Estate and learn more about his vineyard, wine making, etc. 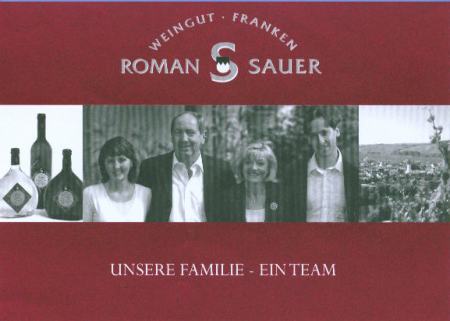 This entry was posted on Saturday, June 14th, 2008 at 6:55 am and is filed under food and wine. You can follow any responses to this entry through the RSS 2.0 feed. You can leave a response, or trackback from your own site.