After a New Years eve with about 40 degrees heat (which did not lend itself to dancing and jumping around), we did not feel like cooking at the first day of 2008. So the six of us – my brother-in-law Michael and his wife Helen, Margit, Lucy, Charlotte and me – went to have a meal at Zonzo. It was our first visit and we wanted to check out the place. From Healesville it is only a short drive to Zonzo which is located a couple of kilometers only from Yarra Glen in the Yarra Valley. It was a beautiful day, blue sky and sunshine, just right to celebrate the beginning of 2008. 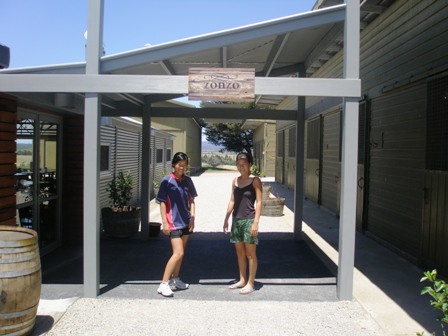 Charlotte and Lucy at Zonzo Restaurant in the Yarra Valley

Zonzo just opened in mid 2007. It is owned by Bart Crescia and Rod Micalles who have been running pizza restaurants for more than 10 years. The dining room offers splendid views of the Yarra Valley, views you do not get from other locations. The place looked like an old horse farm, but our friend Steve Sadlier told us later that it used to be a cattle stud.

The view from the dining room

The interior is functional and modern in a typical Australian shed-like structure. It has a large bar well stocked with all kinds of drinks and a fire place.

The interior of Zonzo

All of us ordered pizza. Australians usually like their food in an exuberant style with lots of different ingredients and a mixture of flavours. The preferred pizza type of our family is the Italian style, and thats what we found at Zonzo. I like them thin and simple with only three, max. four ingredients. It comes as no surprise that a traditional Pizza Margerita is the one I like best. 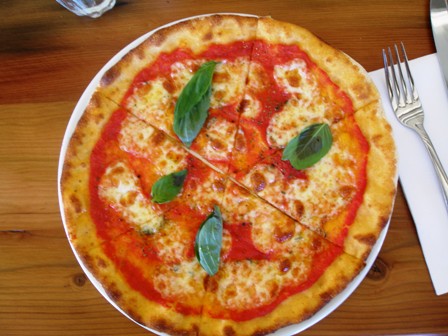 What did we drink with the food? Well, next door to Zonzo is Train Trak, a boutique winery. The waiter suggested we have a tasting before ordering the food, and that is what we did. We selected the ‘2005 Train Trak Pinot Rosé’, a beautiful and lively wine ideally suited for hot days. 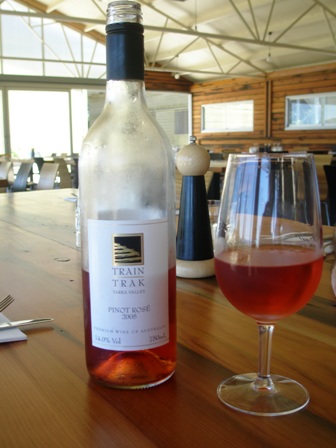 Train Trak also produces Chardonnay, Pinot Noir, Shiraz and Cabernet Sauvignon. They are typical for the Yarra Valley, a cool climate region, and show elegance and style. Needless to say that the wines won many medals. To mention only a few: the ‘2005 Train Trak Chardonnay’ won the gold medal at the Rutherglen Wine Show in 2006, the ‘2005 Train Trak Pinot Rosé’ got a 91/100 rating in the penguin Wine Guide 2007 and the 2004 Train Trak Cabernet Sauvignon’ received from James Halliday a 94/100 score in the 2008 edition of the James Halliday Wine Companion. Not bad, I would say.

Train Trak (www.traintrak.com.au) is named after the picturesque railway that runs across the vineyards. It was established in 1995. It’s owner-winemaker is John Mayall. John Evans is responsible for viticulture. All fruit used to make their wines is estate grown and hand picked. The area under vines is about 18 hectares with a total production of about 90 tonnes per year from which we derive a cropping level of about 5 tonnes/ha.

Would love to have that many barrels myself !

If you visit the Yarra Valley have a look for yourself and taste a delicious Italian meal with a beautiful Yarra Valley wine from Train Trak at Zonzo.