Mosel and Rhine, rivers and wine

I just have arrived in Germany and I am sitting in the train from Mainz to Koblenz. Its 7:00 in the morning on a Saturday and it’s raining. September weather, Germans would say. The Rhine valley is so beautiful. We just passed Bingen and some beautiful old castles, forests and barges on the river. Some small vineyards are nestled in pockets on steep slopes. Within a couple of minutes the train passes through three wine regions, the ‘Rheingau, Rheinhessen’ and then follows the ‘Mittelrhein’ for a while. 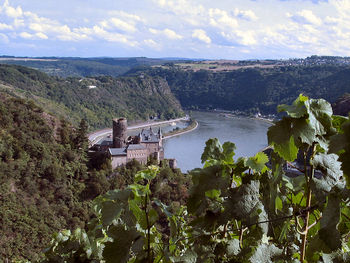 The vegetation is still very green, only slight hints of autumn are to be seen here and there. Another spectacular castle rises on the next hill. I cannot provide you with all the names of these magnificent structures from ancient times. There are so many of them. Villages in white sit on the hilltops. How can they grow the vines on these steep slopes, on these slate plates? The ground consists of slate on top of greywacke, a kind of sandstone generally characterised by its hardness and dark colour. It is a texturally immature sedimentary rock found in Palaeozoic strata. ‘Greywacke’ is the typical ground of the Rhine-Mosel-Nahe river valleys and the adjacent hills. 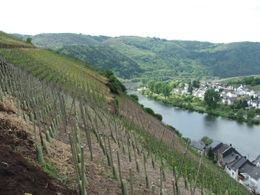 Lots of water flows in the river. My train is on the right side of the river northward bound. During my previous visits I always travelled on the left side of the river. Today I have the opportunity to look over from the other side, which offers quite an amazing new perspective. Another medieval settlement with castle and church: Bacharach, a famous terroir, very picturesque. The part of the Rhine river we are passing is called the Middle Rhine and starts in Bingen and ends in Bonn. From the train I can see the settlements of Oberwesel, Sankt Goar and Boppard; then we reach Koblenz, an old roman garrison town where the Mosel flows into the Rhine river.

More than 2000 years ago the Romans occupied this territory. Garrison cities such as Koblenz secured the area and kept the German tribes people at bay. The Romans used the Rhine and the Mosel rivers to transport goods and troops. Ever since that time, vines have been grown along the rivers Rhine and Mosel. Many of the parcels are quite small. Usually we find vineyards on the southern slopes. The vines are un-irrigated. In some locations elevators are installed to transport materials, equipment and the fruit. About 75% of the area is planted with Riesling on steep slopes (25 to 30˚). Other varieties are Elbling and Mueller-Thurgau. The climate allows the grapes to get sufficient sun and heat. Because the slate soils act as heat storage, releasing the stored heat slowly during the night; temperature fluctuations are kept to a minimum and the ripening seasons is prolonged. Cold air, however, is ‘drained’ from the land by the steep slopes.

The Middle Rhine is one of the certified wine regions of Germany. The area under wines has continually dropped over the last years because of the small farm size and the low profitability of wine production. In 2006 the total area under vines was only 380 ha. However, for many families income from wine production and sales is still an important component of their total family receipts.

In Koblenz I had to switch trains and therefore boarded a slow local carriage which would bring me to my hometown Trier. For me this is the most enjoyable part of the journey. Homecoming involves such strong emotions, almost like tasting a Riesling or any other fine wine. Most of the train route is along the Mosel river and the views from the train are stunning. The rain stopped and here and there light rays of sun broke through the clouds. The green of the vines and the trees is so intensive. Some of the vineyards were already covered with nets indicating that vintage time was near. This year, due to a mild winter and a very sunny spring, many parts of Europe have seen the advent of vintage time earlier than usual. Vintners in the Champagne, in northern France for instance, started to pick their fruit on 23 August already, about two to three weeks earlier than usual (and the earliest time on record since the 19th century). 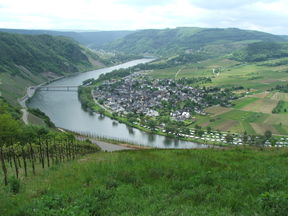 (Source wikipedia: The Mosel near Wolf)

We passed the settlements of Winningen, Kobern-Gondorf and Bullay. The same picturesque scenes as a couple of hours ago at the Rhine were to be enjoyed: vineyards on steep slopes, nestled high just below the hill tops which are covered with forests. A little later the train left the valley behind and entered the hills of the Eifel region. I said good bye to all the vines and vineyards knowing that I would soon meet them again near Trier and that I would soon hold a glass of Riesling in my hand and would taste the reward of extremely hard work on the steep slopes of the Mosel, the Ruwer or the Saar. For me nothing beats Mosel Riesling. I just love its minerality, its crispness, the low alcohol but high acidity, its freshness, the intense floral and citrus fruit characters. Zum Wohl. Auf ihre Gesundheit.

The “Mayer Vineyard” is located in the Yarra Valley, about halfway between Healesville and Yarra Junction on a steep slope overlooking the surrounding valley. The vineyard belongs to the Mayer family, Timo and his wife Rhonda. They and their three children (Rivar, Ruby and Ivy) live in a beautiful, rammed earth house on the top of the hill.

The Mayer and the Adam families (Rivar missing from the picture)

His own vineyard covers about 6 acres (VSP trellising, cane pruned, row spacing 2.5 m, vine spacing 1.5 and 0.75 m) and his wine label is called “Bloody Hill” which is also “written” or should I better say “slashed” (by a tractor slasher) into the remaining paddock in between the two vineyard blocks. Timo produces a “Bloody Hill” Chardonnay, a Pinot Noir and a “Big Betty” Shriaz. The wines can be obtained from various retail outlets (for instance the Wine Hub at the Yarra Valley Dairy or the Winehouse at Southbank in Melbourne) and by mail order. Timo makes also a very delicious Rosé. The total yearly production is about 12 tonnes of fruit which is ‘transformed’ into about 700 cases of wine. 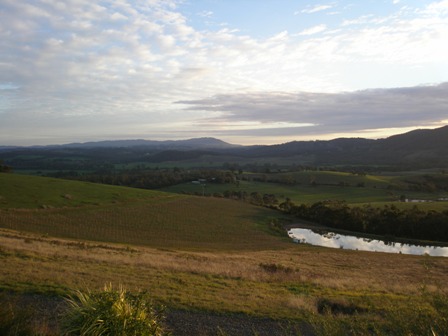 One part of Bloody Hill, the Mayer Vineyard

We were lucky to have had Timo make our 2002 award winning Sauvignon Blanc. However, we have more in common than a love for wine. Timo is also of German origin. He is the son of a farmer from the beautiful lands of the Suebians (Schwaben), home to a German tribe in the South and he cherishes many old local traditions. During a recent birthday celebration we were involved in a breathtaking collective “move the table” ritual, nothing spiritual of course but rather a rustic rural drinking game (with all the glasses and the crockery standing on it), where we physically lifted the table to above our heads chanting merryily, entirely in the Suebian language. All this went very well in the Australian setting of multiculturalism.

My suggestion: Check out the wines now and fill your wine cellar to capacity before they become a cult wine and very, very expensive.